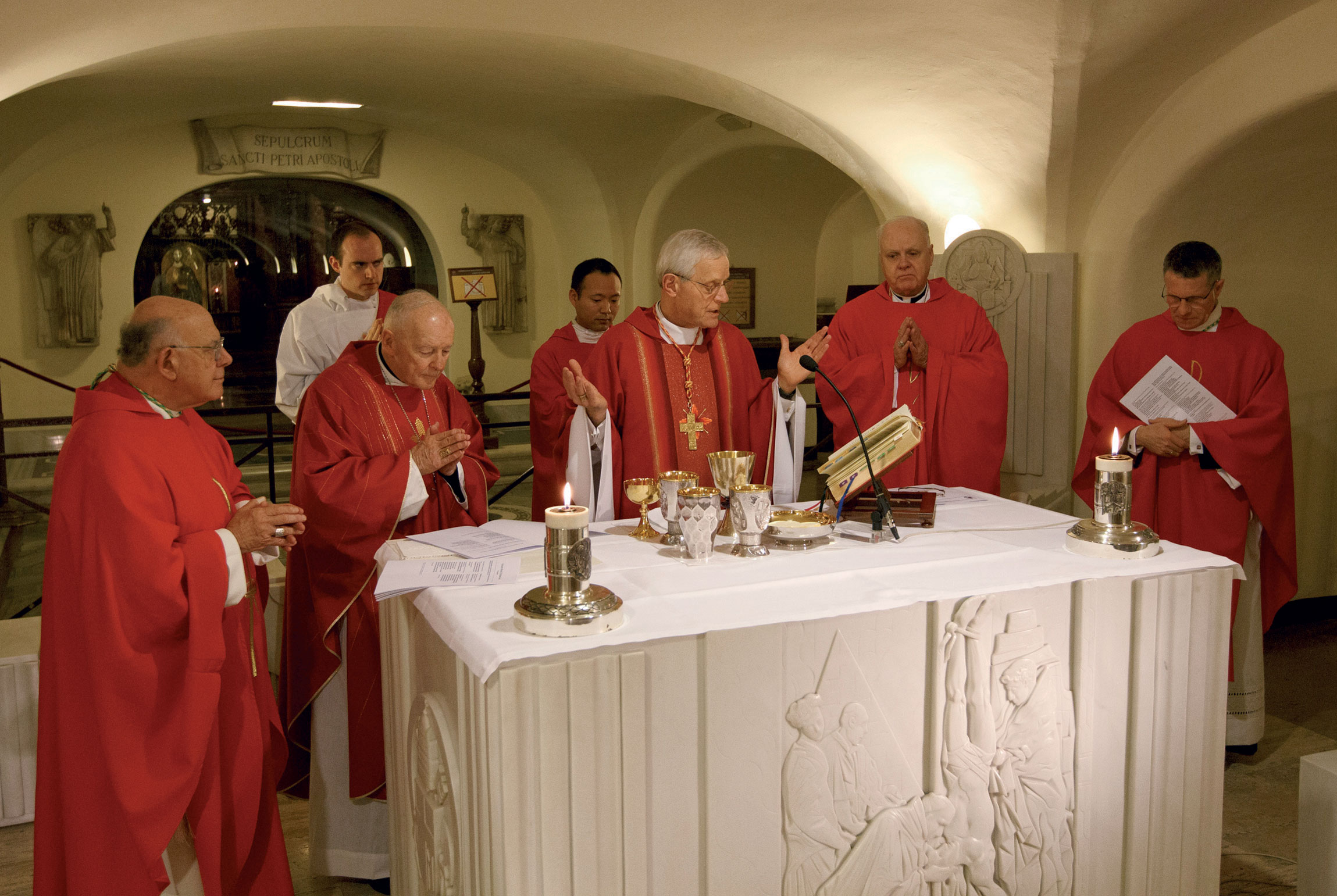 Cardinal DONALD W. WUERL celebrated Mass with US bishops at the tomb of St. Peter on January 16, marking the beginning of their ad limina visits to the Vatican. The visits are made every five years. This group of bishops came from Washington, D.C., Maryland, Virginia, Delaware, West Virginia, the Virgin Islands and the U.S. Archdiocese for Military Services. 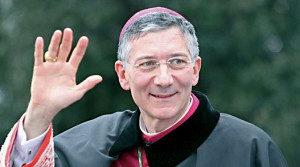 The Holy Father has named FRANCESCO MORAGLIA, bishop of La Spezia-Sarzana-Brugnato, as Patriarch of Venice, Italy.

The newly appointed Patriarch was born in Genoa, and was ordained there in 1977. After receiving his doctorate in sacred theology from the Pontifical University Urbaniana, he taught at the archdiocesan major seminary in Genoa while also serving as an associate pastor in a parish in the city.

Moraglia also held positions as professor of dogmatic theology at the Theological Faculty of Northern Italy, and as professor, and later dean, at the Ligurian Institute of Religious Studies. He also directed the Diocesan Office for Culture and the “Didascaleion” Centre for Studies. He was appointed bishop of La Spezia-Sarzana-Brugnato in 2007, and received episcopal ordination from the archbishop of Genoa, Cardinal Angelo Bagnasco. Venice is one of the most prestigious episcopal sees in the world. In the 20th century, three patriarchs of Venice went on to be elected Pope: Pope Pius X, John XXIII, and John Paul I. 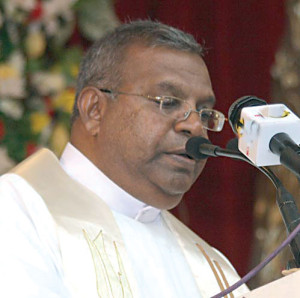 Bishop Fernando was born on May 20, 1948, in Jaffna, into an ardently religious family. His elder brother became a priest (the late Fr. Joseph Fernando of the diocese of Jaffna) and his two sisters became nuns: Sr. Dilecta and Sr. Joela both belong to the Apostolic Carmel Congregation in Sri Lanka.

He was ordained a priest on January 6, 1973 in the Vatican, for the archdiocese of Colombo, by Pope Paul VI.

He is the first bishop from St. Lucia’s Cathedral Parish of the archdiocese of Colombo. He was privileged to be trained under two future bishops, Msgr. Frank Marcus Fernando and Msgr. Nicholas Marcus Fernando.

The National Seminary of Our Lady of Lanka nurtured its future rector in his philosophical studies. He was then sent to Rome to pursue his studies in sacred theology for five years at the Pontifical University Urbaniana. He then became a professor at the National Seminary and worked from 1978-1987 under the rectorship of Rev. Fr. Dalston Forbes, OMI. He taught fundamental morals, ethics, and moral theology. He proceeded to the United States and earned a doctorate in moral theology from the Catholic University of America in Washington, D.C., in 1987. His doctoral thesis was entitled “The Population Policy of Sri Lanka and the Moral Teaching of the Catholic Church.”

He is known in the diocese for reaching out into the community, encouraging Catholics to work to fulfill Catholic social teaching by caring for the poor and the most vulnerable in society.

AT WORK ON NEW CARDINALS’ RINGS 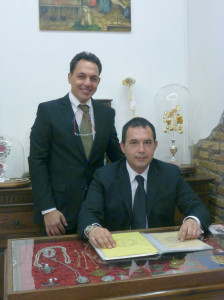 Claudio and Piero Savi, two brothers whose workshop is located in Borgo Pio, close to the Vatican.

Benedict XVI has had the cardinals’ new rings made for his fourth consistory.

Until the last consistory, the Pope presented a big rectangular ring with only a cross to each of the newly appointed cardinals. But now the rings for the new cardinals, which will be a little smaller than the previous ones, will bear the images of St. Peter and St. Paul with a star in the middle, which stands for the Blessed Virgin. These precious rings have been created by ecclesiastical goldsmiths CLAUDIO and PIERO SAVI, two brothers whose workshop is located in Borgo Pio, close to the Vatican.

Congolese Cardinal LAURENT MONSENGWO Pasinya, 72, has been chosen to preach Benedict XVI’s yearly Lenten retreat on the theme, “Communion of the Christian with God.” The cardinal, who is archbishop of Kinshasa, is the second African cardinal Pope Benedict has chosen to preach the week-long retreat. Cardinal Francis Arinze, retired head of the Congregation for Divine Worship and the Sacraments, preached in 2009. 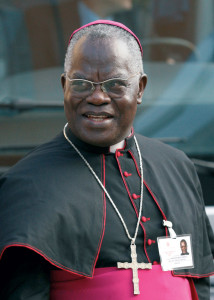 The retreat — for the pontiff and members of the Roman Curia — will run February 26 to March 3 in the Redemptoris Mater Chapel inside the Apostolic Palace. During this time, all Vatican events are suspended and the Pope makes no public appearances. The retreat begins each day at 9 a.m. with the celebration of lauds, and ends around 6:30 p.m. with vespers and Eucharistic adoration. Cardinal Monsengwo will give three meditations each day.

PADRE PIO and JOHN PAUL II will become children and feature in a cartoon series entitled Piuccio and Lolek. This series is the brainchild of two Italian entrepreneurs, two sisters from Treviso, Susy and Mara Pivato, who have thus paid tribute to their mother, Resy, who died of an incurable disease but only after having had a vision, in a dream, of the saint from Pietrelcina (Padre Pio) and the Polish Pope (John Paul II) talking to each other as friends and addressing each other as “Piuccio” and “Lolek,” the nicknames they had as children.

This vision resulted in a publishing project carried out by the Aeduca Company. This project was started with the publication of the first collections of comics, featuring four volumes. Recounting her vision of the Capuchin friar and the Polish Pope in her spiritual testament, Resy wrote: “Bring these two children to life forever, turn their good actions into a universal message to bring home to all men of good will, as examples to imitate in candor, innocence, vitality and spontaneity.” 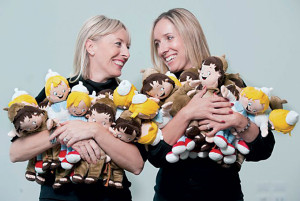 But there is more to it. Two felt toys have been made which reproduce the two protagonists of the stories: Karol Wojtyla (“Lolek”), slim, fair-haired with blue eyes and wearing a white skullcap and blue trousers, and Padre Pio (“Piuccio”), wearing brown sackcloth. And soon 13 other new characters are expected, among them, St. Ignatius of Loyola (“Loy”), St. Francis of Assisi (“Cesco”), St. Augustine (“Tino”), Mother Teresa of Calcutta (“Resy”), St. Clare (“Clary”).

These comics will also be available on DVD and there is already talk of an animated television series.

All this is intended as a non-profit operation. The two sisters, Susy and Mara, will not earn a penny from this initiative. All the proceeds will be allocated to charity.

The first project to be financed will be the restoration of some medical centers of the Franciscan mission in Chad, one of the world’s poorest countries. Once more, the real miracle is that both Padre Pio and John Paul II continue to do good, even though they are no longer with us.