One of the privileged witnesses to the pontificate of Pope Benedict XVI, and to his last months, including the decision to resign his office, was Cardinal Bertone… 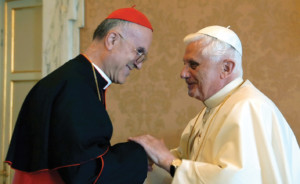 Pope Benedict chose Italian Cardinal Tarcisio Bertone, to be his Secretary of State in mid-2006, a year after his election. Here, Benedict greets Bertone at the Pope’s summer residence in Castel Gandolfo, Italy, on September 15, 2006. Bertone replaced Cardinal Angelo Sodano, who retired from the Secretary of State post after 16 years of service.

At first, Pope Benedict wanted to resign the papacy “before Christmas.” Then, “after thinking about it and praying about it again, he took the final decision to announce it on February the 11, Feast of Our Lady of Lourdes,” recalls Cardinal Tarcisio Bertone. A year after Benedict XVI’s resignation from the public exercise of the Petrine ministry, we ask Cardinal Bertone, one of Benedict’s closest collaborators and most trusted aides, and his Secretary of State for seven years, about those final days. Benedict XVI confided his decision to Bertone already “in mid-2012,” Bertone says. “Thinking about the trip to Brazil for World Youth Day (July 2013) he would say: I am old and I don’t feel up to it.”

Cardinal Bertone greets us in the small sitting room in his apartment, on the prima loggia (first floor) of the Apostolic Palace. A bright and welcoming space, elegant yet not luxurious. He receives me at the door, just as the midday bells sound… 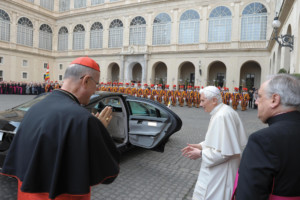 Cardinal Bertone, with his back to the camera, gestures as Pope Benedict XVI leaves the Vatican for Castel Gandolfo, Italy, on February 28, 2013. “I am a simple pilgrim who begins the last stage of his pilgrimage on this earth,” the Pope said at the close of his papacy.

How did you live the period of Benedict’s resignation?

Cardinal Tarcisio Bertone: The Pope had already reached his decision a long time before. He talked to me about it in mid-2012. He felt the weight of his age, most of all because in order to guide the barque of Peter and face the challenges of the Church in our times it is necessary, as he said, to be vigorous both in body and soul. This is the fundamental reason for his decision. When thinking about World Youth Day in Brazil he would say: I don’t feel up to this journey at my age. He wanted to announce his resignation before Christmas but I, being the only one to know, would tell him: you are to publish the book on Jesus’ infancy, let’s not hamper this gift that you give to the Church. There was the encyclical on faith in progress and the Year of Faith had just begun. I tried to insist on postponing… But, after thinking about it and praying about it again, he took the decision to announce it on February 11, Feast of Our Lady of Lourdes. This decision has a great, historic value, it has proven the faith of the Church in her Founder. Benedict XVI often said: it is the Lord who guides the Church. This act has to be interpreted and understood within the faith of the Church, and not according to purely human readings.

Would you tell us about your relationship with Benedict?

Cardinal Bertone: Our relationship began when he came to Rome as Prefect of the Congregation for the Doctrine of the Faith [in 1982], but I already knew of him and esteemed him as scholar, from the time of the Council [1962-65]. Our relationship has always been marked by mutual esteem and trust. I remember our meetings, even outside of the regular audiences, our conversations, even at table, his annotations. As Secretary of State, I have always communicated and shared with the Pope the issues of the Church. There has always been a filial obedience and a total collaboration. Even during this past year I met with him several times, and talked to him on the telephone. He is intellectually very lucid and he has an extraordinary memory.

Benedict’s action has been criticized…

Cardinal Bertone: Now, in the face of the stature of his personality and his gesture, those critiques are vanishing. Instead memory and esteem are growing. He will be remembered as a great Pope, also for his initiatives of reform, his ability to communicate joy and his personal sanctity, which has the mark of tenderness and humility. The first one to remember him is Pope Francis, who is bound to him as to a sage counsellor. He loves him very much and this is a great example. 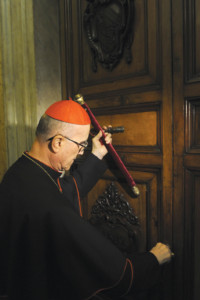 Italian Cardinal Tarcisio Bertone seals the door of the Pope’s private apartment in the Apostolic Palace at the Vatican February 28. As camerlengo (“chamberlain”), Cardinal Bertone was charged with administering the temporal goods of the Church following the resignation of Pope Benedict XVI.

“Same doctrine, different character…” Is this the difference between Benedict and Francis?

Cardinal Bertone: Between these two Popes, the continuity is of substance. Their characters are different, just as their place of origin and their pastoral experiences, but this is the point! The Lord really is amazing in the choice of His vicars, original…

Cardinal Bertone: Pope Francis values pastors a lot and he wishes that all those who have responsibility within the Church incarnate pastoral charity. But he also highly appreciates diplomats: he nominated some for important roles in the Curia and he has restarted regular meeting with the Nuncios. The choices of each Pope clearly depend on each Pope’s character, personal knowledge, and on the qualities each Pope values as fitting to the tasks to carry out.

How will the Curia be reformed?

Cardinal Bertone: The reform of the Curia is a recurring issue in the history of the Church for centuries. In more recent times we can recall the reform desired by John Paul II and Paul VI, who was a deep expert in the dynamic of the central government of the Church. Both of them had intensely dialogued with those concerned and with the world’s bishops’ conferences. Now, with a growing number of offices, the Curia needs better to define competencies, and it needs to strive for efficiency and coordination. Up to now the Secretary of State has been the connection between the various offices and the Pope, the coordinator for a unity in the aims and a harmony in the actions. The new figure of a “Moderator” of the Curia has been proposed, and he would precisely take over this task. The issue needs to be studied carefully. Besides, the Council of the Eight Cardinals has also the hard task of harmonizing the different functions at the summit of the Church.

Is a “splitting” of the role of the Secretary of State desirable?

Cardinal Bertone: The question is open. The Secretary of State, obviously, has an immense amount of work to do within the Church, and also regarding the relationships with States and international organizations (First and the Second Section of the Secretariat of State). It seems to me that Pope Francis hasn’t made up his mind and is waiting for proposals and suggestions.

Was Benedict XVI working for a reform of the Curia?

Cardinal Bertone: He was very much aware of the multitude of offices in the Curia and of a need for coordination and efficiency. He had clearly in mind the problem and he was convinced of the need to face it. However, his reform aimed much more toward the conversion of people’s hearts and was focused on difficult, urgent issues such as that of giving the Church a legislation against paedophilia, against money-laundering and anti-terrorist measures.

The “Vatileaks” affair: do you think you have a responsibility? Do Francis’ decisions mirror the conclusions of the inquiry?

Cardinal Bertone: Concerning the leaks of confidential documents from the Pope’s desk, I don’t understand what I should make amends for. I am sorry for not having managed to stop the scandal. With Pope Benedict, I shared this sorrow and I have to say that I have been sustained by his trust. He was an example of patience and rectitude of judgement. He knew my commitment and my loyalty, and he always stood up for me. At the first meeting in the Sistine Chapel, after his election, even Pope Francis told me: “I thank you for your faithfulness and loyalty.”

To your knowledge, do Pope Francis’ decisions mirror the conclusions of the three-cardinal commission of inquiry?

Cardinal Bertone: I believe that at least in part Francis’ decisions are guided by the reading of the conclusions of the inquiry and by his conversations with Benedict XVI, but I don’t think the “dossier” is that crucial. I believe that, at the same time, his decisions are motivated by evaluations made by cardinals during the General Congregations before the conclave, and by the information gradually collected through the wide network of relations he maintains.

How do you view the Vatican bank (Institute for the Works of Religion)?

Cardinal Bertone: The scandal has been greatly exaggerated. In past decades, there have been deplorable behaviors that cast a shadow on the Vatican bank, but in recent years a path of good administration has begun, with an appropriate verification of the clients, within measures against money-laundering. As for my own role, I have noticed that sometimes the Secretary of State is said to have an almost absolute power, as if everything derived from his desire for centralization, and instead there are specific competencies covered by State laws. The lay Board of Superintendence, the General Directorate and the Commission of Cardinals each carry out specific tasks.

Cardinal Bertone: It is a coincidence that doesn’t escape attention, but the search for a new president had already begun in June 2012. There is a physiological period of examination of professionally suitable people, with moral integrity and compatible with the nature of this organization. Before Christmas, the cardinals pointed out the choice that was later published. The Pope followed all the steps and in the end he intervened to approve the choice. Besides, he knew the family of Ernst von Freyberg.

On morals, is there a shift of direction with Pope Francis?

Cardinal Bertone: There is no shift in the moral doctrine but a pastoral approach oriented to the situations of our time and to the challenges that the dominant culture puts in front of us. Mother Church steps forward with great mercy yet also with clarity toward the difficulties that young people, families and the entire society go through.