A New Tone of Urgency

A New Tone of Urgency

“It is increasingly intolerable that financial markets are shaping the destiny of peoples rather than serving their needs, or that the few derive immense wealth from financial speculation while the many are deeply burdened by the consequences.” —Pope Francis, June 16, address to a conference in Rome sponsored by Catholic Relief Services, the University of Notre Dame’s Mendoza College of Business, and the Pontifical Council for Justice and Peace.

Pope Francis is simply not slowing down. Each day, each week, he not only continues the pace set in the first months of his pontificate, but increases it, announcing peace initiatives, scheduling trips abroad (Albania in September, his first trip to a European country), granting interviews (see pages 14-16 in this issue), carrying out everything with an increasing tone of urgency.

On June 16, in an address to a June 16-17 conference on “Investing in the Poor: How Im­pact Investing Can Serve the Common Good in Light of Evangelii Gaudium,” sponsored by Catholic Relief Services, the University of Notre Dame’s Mendoza College of Business and the Pontifical Council for Justice and Peace, Francis declared that it is “increasingly intolerable” that the world’s financial markets have the power to determine people’s fate instead of being at the service of people’s needs.

He criticized the way “the few derive immense wealth from financial speculation while the many are deeply burdened by the consequences.” And he called on governments to combat “an economy which excludes and discards” the poor, the unborn, the elderly.

Why is there a new urgency in his voice? Because he realizes he is getting older — 77 and a half. (In his June 9 interview, discussing his security and safety in crowds, he said, “Let’s be realistic, at my age I don’t have much to lose.”) He has clearly decided to go “all out,” now, and not next year, to preach good and denounce evil.

From May 24-26, Francis went to the Holy Land. When he came back to Rome, in early June, he hosted an unprecedented meeting of private prayer in the Vatican Gardens with the leaders of Israel and Palestine, and with Ecumenical Patriarch Bar­tholomew at his side (June 8). Then, he was so exhausted that he took two days off — but still took time out to grant an interview to a Portuguese journalist.

Now, looming on his agenda, are more trips: to Korea (August), Albania (September), Sri Lanka and the Philippines (January) and (most likely) Philadelphia in the United States (September, 2015). And now some in Rome are whispering that Francis may even soon make a dramatic trip to… China.

Throughout all of this, he continues to denounce evil where he sees it: in the drug trade, in human trafficking, in the global arms trade, in all sorts of sordid and destructive commerce — even in established financial markets (as in the opening quote).

At the core of his critique of these global evils is his conviction that human choices can effect change, for good and for ill. But there is one word more than any other which is coming to dominate Francis’ teaching: “family.”

Over and over again, he is saying that the family is a great good, a social and sacramental cell which protects and preserves individuals and societies — a good that is under attack from disintegrating cultural forces. One senses that Francis sees the Synod on the Family coming this October as a battleground, but not (primarily) over the question of divorced and remarried Catholics and their possible admission, under certain conditions, to Communion, but rather for the family itself, as a social unit, as a good which is under such pressure that it seems headed, in the West, for extinction. Increasingly, Francis is speaking of the good of being a father, or a mother, and of the good of being children in a family, not orphans. On the evening of June 16 in Rome, amid torrential rain, Francis opened the Ecclesial Convention of the Diocese of Rome by emphasizing the Church’s role as “mother” in a society where more and more children are leading the lives of “orphans.”

He noted that many people feel “disoriented” from the difficulties of life, often lacking meaning and value. He then imagined the “hectic day” of a parent: getting up early, getting the children to school, the long commute to and from work. “He begins to feel a weight on him which is crushing,” Pope Francis said. “And we ask ourselves: But is this life? Then, in our hearts, arises the question: How can we do this to our children — our children — and give a sense to their lives? Because they feel the way we sometimes live our lives is inhuman, and do not know which way to go so that life is beautiful, and you are content to get up in the morning.” He lamented the fact that many men do not have time to play with their children, and said it leaves the child like an orphan. “Orphans, with no memories of the family, because… their grandparents have been moved away to a nursing home,” he said. “Or­phans without affection or love today because everyone is in too much of a hurry: Dad is tired, mom is tired… they are orphaned!”

Francis lamented a culture that leaves young people orphaned without jobs, and multiplies the opportunities for pleasure, distraction, curiosity, but “is not able to bring man to true joy.” He said the Church needs to be a mother. “Being in the Church is being at home with mom,” he said. Without this, going to church becomes like going to an institution, and gives it the identity of a football team, where people are just “fans” of being Catholic. He said people need to feel the “tenderness” of a mother in the Church. “We have to always welcome people with a big heart, like family,” he said. 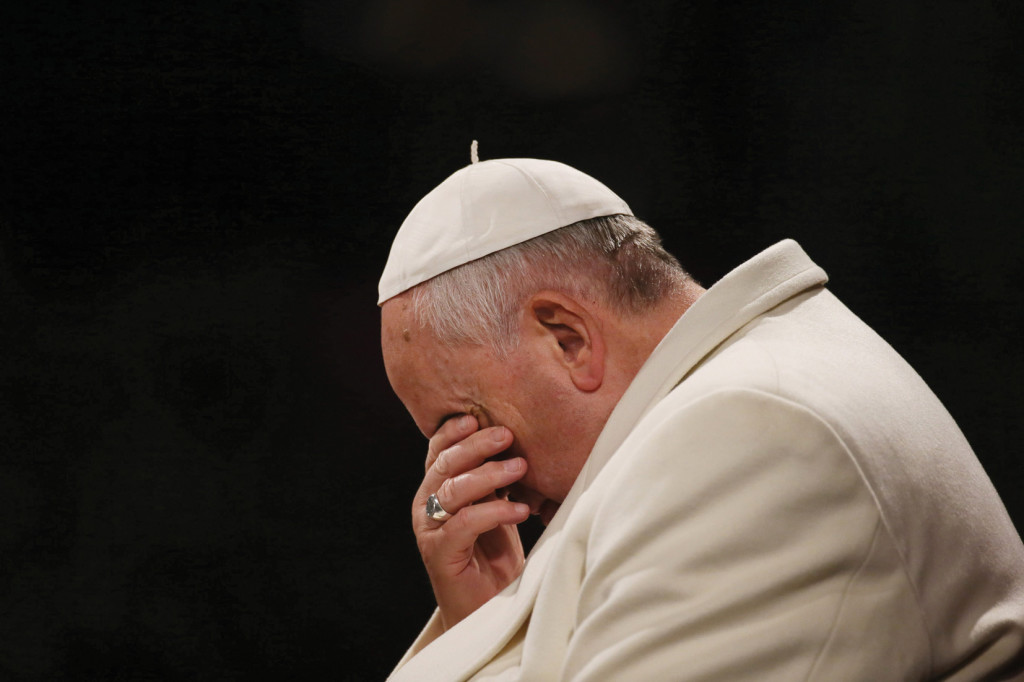