Pope appeals for end to violence in Ukraine

Pope appeals for end to violence in Ukraine 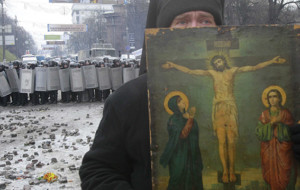 In Ukraine, what started as demonstrations quickly evolved into violent confrontations.

After months of protests, a dramatic change in Ukraine. At a high price — more than 77 people killed. Now Russia is moving. Can further bloodshed be avoided?

After a day and a night of violent confrontations on February 18-19, leading to the deaths of at least 77 people, Pope Francis and Ukrainian Church leaders called on February 19 for an end to all violence and a serious commitment to dialogue for the good of Ukraine.

“With a troubled heart I am following what is happening in Kiev,” Pope Francis said at the end of his weekly general audience. “I assure the Ukrainian people of my closeness and I pray for the victims of the violence, for their families and for the injured. I call on all sides to stop every violent action and seek agreement and peace.”

In Kiev, also on February 19, Archbishop Sviatoslav Shev­­chuk, major archbishop of the Ukrainian Catholic Church, said: “In the name of God, we condemn violence, ruthlessness and the ignoring of human rights and the will of the nation. I state with great sorrow that calls by the Churches to stop the shedding of blood and seek a peaceful settlement of this conflict have not been heard.”

Then, suddenly, unexpectedly, the government of President Viktor Yanukovych fell, and the bloodshed, for a moment, ended.

But in the days that followed, Russian President Vladimir Putin ordered some 6,000 Russian soldiers into Crimea, a decision that US President Barack Obama and Secretary of State John Kerry denounced, calling it an “aggression” against Ukraine’s territorial integrity. Ukraine’s interim Pres­ident, a Baptist minister named Olex­ander Turchynov al­so warned Russia against any “military aggression” in Crimea.

As of press time, on March 3, the tense situation was not yet resolved and it was unclear whether a way could be found toward a peaceful solution, or whether civil war within Ukraine would break out, and whether Russia and others would also engage in military actions.

As uncertainty reigned in Ukraine and Russian troops appeared to have control of the Crimean peninsula, Pope Francis again asked the world’s Christians to pray for Ukraine and urged the parties involved in the conflict to engage in dialogue.

“I ask you again to pray for Uk­raine, which is in a very delicate situation,” Pope Francis told tens of thousands of people gathered in St. Peter’s Square for the midday recitation of the Angelus March 2. “While I hope that all sectors of the country will endeavor to overcome misunderstandings and build the future of the nation together,” the Pope said, “I make a heartfelt appeal to the international community to support every initiative in favor of dialogue and harmony.” 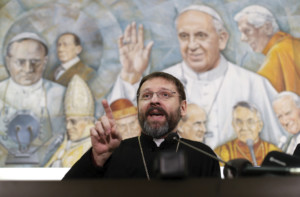 Archbishop Sviatoslav Shevchuk of Kiev-Halych, major archbishop of the Ukrainian Catholic Church, speaks February 25 during a Rome news conference on the recent events in the Ukrainian capital (CNS photo).

After Russian troops entered Crimea, Major Archbishop Sviatoslav Shevchuk of Kiev-Halych, head of the Ukrainian Catholic Church, issued a statement March 1 saying, “Ukraine, unfortunately, has been pulled into a military conflict. So far no one is shooting, so far people are not dying, but it is obvious that military intervention has already begun.”

“Our people and our country are currently in danger,” the archbishop said. “We must stand up for our country, to be ready — if necessary — to sacrifice our lives in order to protect the sovereign, free, independent, and unified state,” he said in the statement distributed by the Catholic magazine Credo.

In Ukraine, March 2 was “Forgiveness Sunday” for Eastern Catholics and members of the Orthodox churches; Lent began March 3 for Catholics and Orthodox who follow the Byzantine tradition.

In their Lenten letter, Archbishop Shevchuk and members of his synod called on Catholics to use the 40 days of Lent as a time of prayer, fasting and almsgiving to grow closer to God and to one’s neighbors. Lent, they said, is a time to convert from sin, suspicion and hatred and take responsibility together for the future of the country.

American journalist Paul Goble, who specializes in Eastern Europe and Russia, wrote in an analysis piece on February 27 that the Ukraine situation was critical for the future not just of Ukraine but also of Russia.

Quoting Georgy Satarov, a Russian social scientist who in the 1990s was an advisor to then-Russian President Boris Yeltsin, Goble wrote that “further destabilization of Crimea could easily become ‘the first step toward the rapid disintegration of Russia’ and mean that Vladimir Putin will pass into history not as he imagines as the leader who put a stop to its disintegration but rather as ‘the terminator of Russia.’”

Satarov said that, in his view, there are “at a minimum, three equally plausible explanations” for the Russian soldiers to enter Ukraine.

The first: that what is going on is part of Putin’s program to restore Russian domination over Ukraine or at least over a portion of it.

The second: that what is happening is the work of “Russian force structures who do not agree with Putin.” Such people could have various goals. One would be to promote Putin’s program but in ways he might be reluctant to follow. Another could be the playing out in foreign affairs of an internal political struggle that could isolate Russia and lead to a “criminal-police dictatorship” and “the overthrow” of Putin.

And the third possible explanation, according to Satarov: that what is going on is the work of “local Crimean ‘hawks’ who want to put before the Russian authorities a fait accompli.” Their goal, he says, would be the establishment of an independent state “under the aegis of Russia” much like Abkhazia or South Osetia. 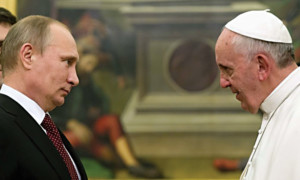 On November 24, the day before he met Russian President Vladimir Putin in the Vatican, Pope Francis greeted Ukrainians marking the 80th anniversary of the 1932-1933 “Holo­domor” or “Terror-Famine” of Ukraine.

At the end of his Angelus address on November 24, the Pope greeted the Ukrainian pilgrims remembering “the great famine provoked by the Soviet regime that caused millions of victims.”

The next morning, just five hours before Putin was scheduled to arrive, Pope Francis joined the Ukrainian Catholic pilgrims from dozens of countries and told them that loving one another, loving the Church and working for Christian unity are the best ways to honor those who were martyred for their faith.

“Every aspect of our Christian lives should be animated by the desire to build together, to collaborate, to learn from one another and to witness to the faith together,” the Pope told the pilgrims from the Eastern Catholic Church on November 25.

The Ukrainians celebrated a Divine Liturgy before the Pope arrived. The Pope focused his remarks on St. Josaphat, who was martyred in 1623 for supporting the unity of his Byzantine-rite Church with Rome, and on the Ukrainian Catholics martyred under the Soviet regime for the same reason. The Pope told the Ukrainian pilgrims, “The best way to celebrate St. Josaphat is to love one another and love and serve the unity of the Church.” —Cindy Wooden (CNS)