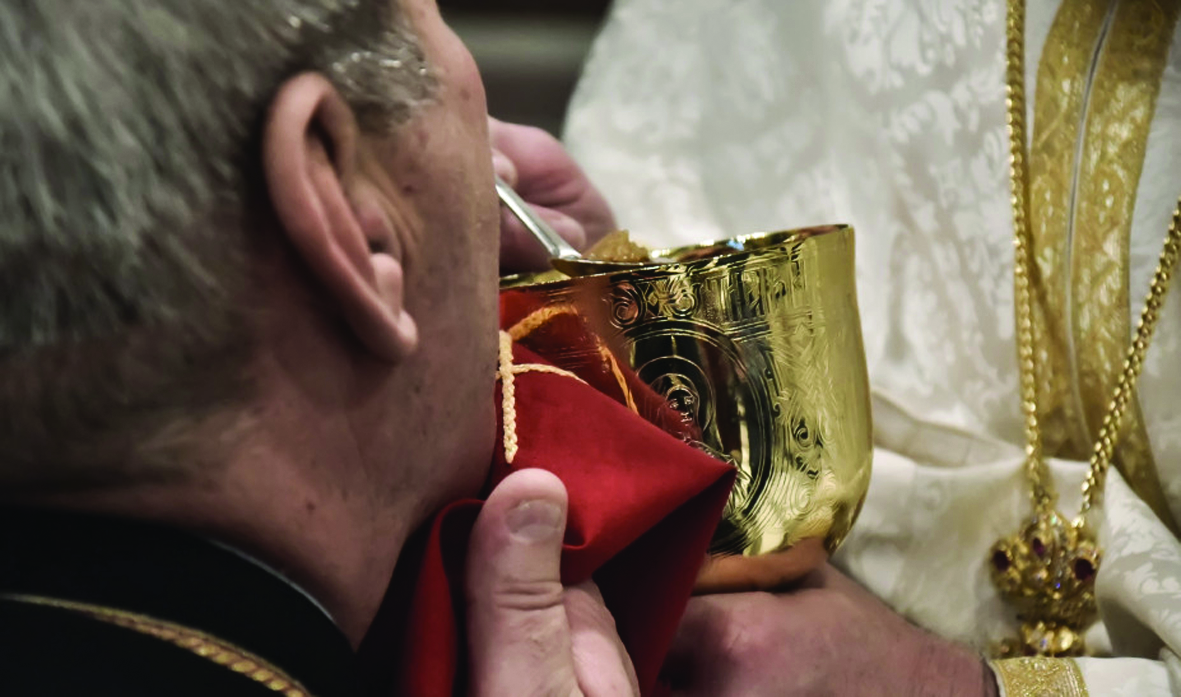 During this meeting, the Official Letters of Their Beatitudes the Orthodox Primates that had been received thus far in response to the letter of the Ecumenical Patriarch to them of May 17th of this year, on the issue of the mode of distribution of Holy Communion that emerged after the appearance of the coronavirus pandemic, were read and discussed. It was satisfactorily determined that their opinion coincided with that of the Ecumenical Patriarchate. This consists of the following:

At the same time, the Mother Church, mindful of the special needs of Her children in the Diaspora, urges the Chief Shepherds who serve in the Diaspora that with pastoral sensitivity, responsibility, and consciousness, to temporarily make, by economia, accommodations to problematic situations that arise from local laws of the State for the greater spiritual benefit of the Christian people, always in coordination with the Sacred Center at the Phanar. (OrthodoxTimes) 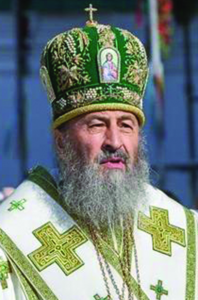 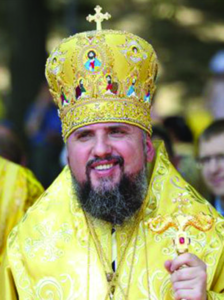 Thousands of Orthodox faithful flocked to the Serbian Orthodox Cathedral of the Resurrection in Podgorica, the capital city of Montenegro, on June 15 to show their support for the rights of the canonical Serbian Church and to pray to God to help protect the Church there. The parishioners gathered at the call of His Eminence Metropolitan Amfilohije of Montenegro and Littoral, the head of the largest Serbian diocese in Montenegro, reports Sputnik-Serbia.

The Orthodox faithful gathered in protest of the ongoing persecution being faced by the canonical Church in Montenegro, especially concerning the new bill according to which the state can seize properties from the Serbian Church and transfer them to what they consider the schismatic Montenegrin Orthodox Church, currently headed by “Metropolitan” Mihailo Dedeić, who was defrocked, excommunicated, and anathematized while serving as a priest of the Patriarchate of Constantinople in Italy.

The state has also refused to grant or extend visas to a number of clergy and monastics of the Serbian Church, forcing them to leave Montenegro, and is also aiming to destroy certain Serbian Orthodox sites.

The recent measures are part of President Milo Đjukanović’s ambitions to acquire a recognized autocephaly status for the tiny “Montenegrin Church,” in the same vein as President Poroshenko did for the Ukrainian schismatics.

At the end of the service, His Grace Bishop Joanikije of Budimlja-Niksic read out the Serbian Church’s appeal to the Montenegrin authorities, in which he noted that the authorities do not even hide the fact that the bill is aimed against the Serbian Church, whose parishioners make up 95% of the population of Montenegro. The bill is aimed exclusively “against the Church” and “the rights and freedoms of Orthodox priests and believers,” Bishop Joanikije said, asking the authorities to withdraw the draft law and prepare a new one that would correspond to both Montenegrin law and international standards of freedom.

“Today,” said the bishop, “before the Cathedral of the Resurrection of Christ, we promise and we swear that we will keep, restore, and defend our sacred places, the lives of our saints, our churches, monasteries, cemeteries, and the graves of our ancestors!” President Aleksandar Vučić of Serbia has also called on the Montenegrin authorities to abandon the bill, citing concern for the Serbian population in Montenegro and the desire to maintain good relations between the states. ( www.orthochristian.com)

Google Bucharest was sanctioned on June 17 by the National Council for Combating Discrimination (CNCD) for not taking any action concerning the blasphemous renaming of the Romanian Orthodox Cathedral of the Nation’s (or People’s) Salvation on Google Maps.

The name of the new church was left as “Cathedral of the Stupidity of the Nation” in the app for several days, reports the Basilica News Agency.

The name change was first noticed by Android users on May 2. The Orthodox faithful quickly took to social media, demanding that the issue be remedied as quickly as possible. Patriarchate spokesman Vasile Bănescu noted that the cathedral was built “in memory of the best of the people of this country—its heroes.”

“The Christophobia of some people … indicates a dangerous moral pathology that is already causing much harm in Europe and the world that Christianity has civilized over two millennia,” he said.

According to the CNCD communiqué, Google Bucharest, the Romanian subsidiary of the American company, received a misdemeanor fine of $2,325 (10,000 lei) by unanimous vote. The CNCD believes that the situation constitutes an act of discrimination and violates the right to dignity.

Google Bucharest is also obliged to publish a summary of the decision on the front page of the Romanian version of Google. (OrthoChristian)

“Orthodox Unity of Ukraine,” launched June 11 within the framework of the public organization Spiritual and Religious Perspective of Ukraine, looks to “work out forms of unification acceptable to both churches,” reports the Religious Information Service of Ukraine.

The Coordinating Council of the public organization includes politicians, religious figures, scholars, and journalists who will work to achieve the goals and objectives put forth in the “Memorandum on restoring the unity of the Orthodox in Ukraine,” drafted by the Organizing Committee.

The authors of the memorandum claim that both the clergy and laity of the UOC and the OCU are “dominated by the desire to unite,” which gives the new movement the right to work towards creating an environment where means of unification and real cooperation acceptable to both the UOC and the OCU can be found.

The emergence of a free Ukraine 30 years ago was accompanied by “bursts of search for the independence of Orthodox Ukrainians,” which culminated in the creation of the “Orthodox Church of Ukraine,” the memorandum reads.

Nevertheless, the organization also expresses its dissatisfaction with the “unification council” organized by the Patriarchate of Constantinople and former President Poroshenko in December 2018, which united the schismatic “Kiev Patriarchate” with the “Ukrainian Autocephalous Orthodox Church,” but which was not participated in by the Ukrainian Orthodox Church.

According to the founders of “Orthodox Unity of Ukraine,” the result of this council was the appearance of two “canonical Orthodox Churches—the OCU and the UOC, which continue to exist separately for purely political reasons.” (OrthoChristian) 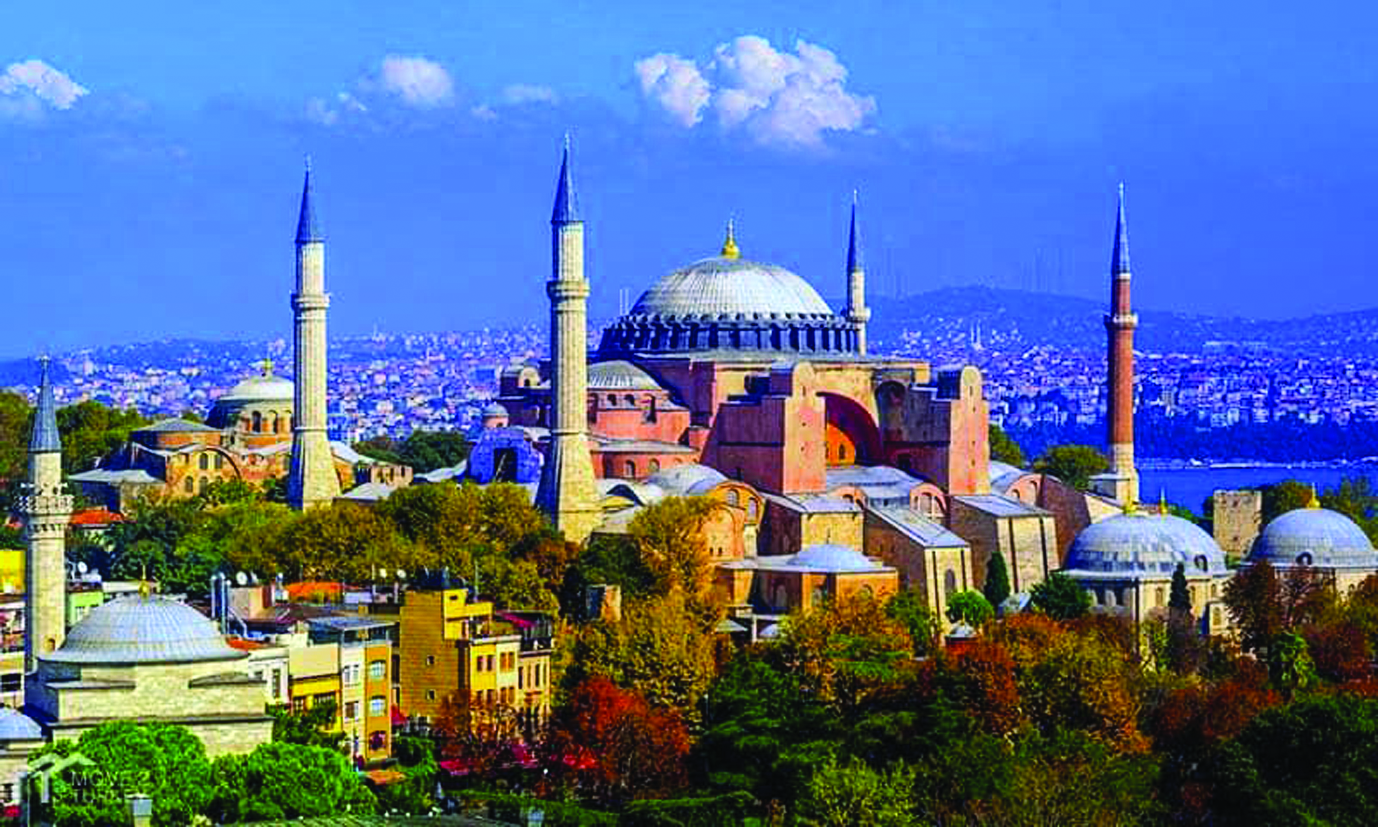 Hagia Sophia was the main cathedral of the Byzantine Roman Empire from the 300s until the 1400s — almost 1,200 years. The Turks under Sultan Mehmet conquered Byzantium in 1453

In a historic verdict, Turkey’s top court this summer returned the world’s greatest Byzantine basilica to its previous status as a mosque after it abolished President Atatürk’s 1934 decision to turn Hagia Sophia into a museum.

Hagia Sophia, constructed in the 4th century in what is now Istanbul, was the main cathedral of the Byzantine Roman Empire until the 15th century, when Ottoman conquerors converted it into a mosque, which it remained until it was secularized in 1931 and became a museum.

Turkey’s highest administrative court, the Council of State, reached a unanimous verdict declaring that president Kemal Atatürk’s cabinet had no right to turn Hagia Sophia into a museum as part of his secularist reforms and has rendered the decision unlawful.

Byzantine Orthodox Ecumenical Patriarch Bartholomew, in a June 29 sermon, said, “Hagia Sophia belongs not only to those who own the monument but also to all of humanity… any conversion of Hagia Sophia into a mosque will turn millions of Christians around the world against Islam.” (from ChurchMilitant and Orthodox Times)

Ecumenical Patriarch Bartholomew will lay the foundation stone for the first Orthodox monastery in Austria – which will be the first in Central Europe, on September 26.

It was originally supposed to occur on June 27; however, it was postponed due to the coronavirus pandemic.

The official foundation will be laid by the Ecumenical Patriarch together with Metropolitan Arsenios of Austria and Exarch of Hungary and Central Europe, the Catholic Bishop of Burgenland, Egidio Zivkovic, and others.

First announced in 2014, the monastery will be built in the eastern Austrian federal state of Burgenland on the border with Hungary. Metropolitan Arsenios also expressed his belief that it would be a “bridge” that would unite Austria with Greece. The construction of the other buildings will follow – the dorms for the monks, reception halls, library, dining room, adjoining rooms and workshops, while a hostel is also planned.