October 24 interview in L’Osservatore Romano with Cardinal Jean-Claude Hollerich, Archbishop of Luxembourg and Relator General of the upcoming Synod on Synodality

By Andrea Monda and Roberto Cetera 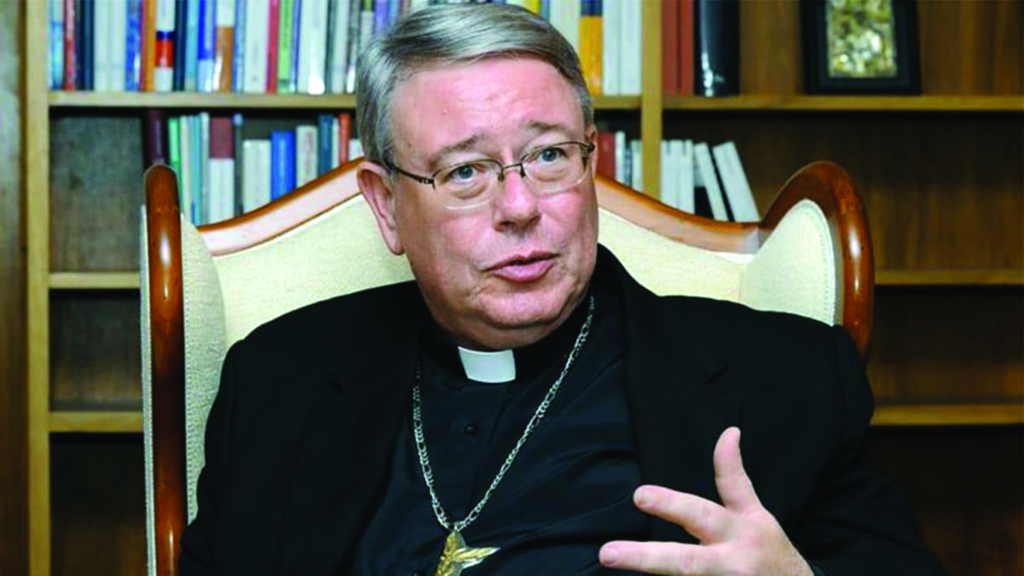 Following are excerpts of an October 24, 2022 interview in L’Osservatore Romano with Cardinal Jean-Claude Hollerich, Archbishop of Luxembourg and president of the Commission of the Bishops’ Conferences of the European Union. The interview was conducted by Andrea Monda and Roberto Cetera.

Cardinal (Matteo) Zuppi was interviewed on the Synod of the Italian Church. With much honesty, he did not conceal that there had been less participation than expected…What is your impression of the course of the Synod in the European context?

CARDINAL JEAN-CLAUDE HOLLERICH: Yes, I read that interview with great interest. […] I believe that today in Europe we are suffering from a pathology, that is, that we are unable to see clearly what the mission of the Church is. We always talk about structures, which is certainly not a bad thing, because structures are important and certainly need to be rethought. But there is not enough talk about the mission of the Church, which is to proclaim the Gospel— proclaim, and above all testify, the death and resurrection of Jesus the Christ. A testimony that the Christian must interpret mainly through his commitment in the world for the protection of creation, for justice, for peace. […]

Certainly, the difficulty observed in the synods in various countries was influenced by a certain instinctive defense of one’s status on the part of the clergy …

CARDINAL HOLLERICH: The concept of synodality was introduced by Pope Paul VI as a requirement of collegiality, of communion among bishops. The Second Vatican Council had the preliminary need to complete what had remained pending with the First Vatican Council, whose focus was entirely on the figure and prerogatives of the Roman pontiff. So the effort of the meeting was above all to define the role of the bishop. But in Lumen Gentium the concepts of “people of God on the way” and of the Church as “temple of the Holy Spirit” were introduced for the first time; the “universal priesthood” which concerns all the baptized is made explicit. […] The baptismal priesthood takes nothing away from the ministerial priesthood. Indeed, all of us priests must understand that there is no ministerial priesthood without a universal priesthood of Christians, because it originates from this. I am well aware that the difficulty of assimilating this concept, fundamentally so elementary, is opposed by a priestly formation that still rests on an “ontological diversity” that does not exist. Theologians must get to work on this and provide more certain definitions around the theme of character and sacramental grace. But above all, the bishops must seriously and profoundly put their hands on the formation of future priests. We still have seminaries today that I call “liberalized Tridentine.” We must not take further steps towards “liberality,” but take the path of “radicalism.”

[…] And this question is also the hallmark of this pontificate: to accept the inadequacy of a pastoral care born of bygone eras and to rethink the mission. A choice that has profound and courageous theological implications.

You speak of an unsuitable pastoral action with regards to the times. Why? What times are we living in?

CARDINAL HOLLERICH: […] You see, my generation has lived and is living changes that no one has experienced before. I would say the greatest since the invention of the wheel. […] There will be very, very big anthropological transformations. In the awareness that man can only partially influence his own evolution. […] Our pastoral action speaks to a man who no longer exists. We have to be capable of proclaiming the Gospel and of making the Gospel understood by today’s man who mostly ignores it. This implies greater openness on our part and also the availability — while being firm in the Gospel — to allow ourselves too to be transformed.

When we speak about anthropological changes, our thoughts turn first of all to relations between men and women. Paul VI had already anticipated the greatest change.

CARDINAL HOLLERICH: Yes, Humanae Vitae is a marvelous text. It is truly sad that it has gone into history only for its judgment on contraception. […] Today the world has radically changed. First, sexuality and the gift of life were separated, and now also sexuality and affection. Many young people experience their sexuality in a way that is completely separate from feelings. And they did not invent this on their own but rather learned it from the world of adults. Marriage, not just the sacramental kind, is a practice that is obsolete in large parts of Europe. […]

“Many of our brothers and sisters tell us that, whatever may be the cause of their sexual orientation, they definitely did not choose it. They are not ‘rotten apples.’ They too are the fruit of creation”

Staying on this topic, can pastoral action be adapted to these anthropological changes?

CARDINAL HOLLERICH: Certainly. And it was precisely a pastoral need which raised a reflection on the theme of gender, which caused some criticism. […] And I constantly see that young people stop taking the Gospel into consideration if they have the impression that we are discriminating. For young people today, the greatest value is non-discrimination. Not only of gender, but also ethnicity, origins, social status. They get really angry about discriminations! A few weeks ago I met a 20-year-old young woman who said to me: “I want to leave the Church because she does not welcome gay couples.” I asked her: “Do you feel discriminated against because you are gay?” And she answered: “No, no! I am not a lesbian, but my best friend is. I know her suffering and I do not intend to be part of those who judge her.” This made me reflect a lot.

However, Protestant Churches that have a more liberal approach, and bless gay couples, do not seem to be more greatly appreciated by young people…

CARDINAL HOLLERICH: Certainly not. Because that is not enough. A profound change in cultural paradigm is needed and a conversion to the spirit. It is not a matter of canon law, or norms or structures… We are called to proclaim the Good News, not a set of norms and bans…

Thus, to give an example, the issue of blessing homosexual couples that was discussed: frankly, I don’t think the issue is decisive… If we think about the etymology of “blessing” (from the Latin bene dicere, literally: to say good things), do you think that God could ever “male dicere” (literal Latin translation: to say bad things) two people who love each other? I would be more interested in discussing other aspects of the problem. For example, what is causing the considerable increase in homosexual orientation in society? Or why is the percentage of homosexuals in ecclesial institutions higher than in civil society?

Thus, starting again from an empty tomb in Jerusalem on a spring Sunday morning…

CARDINAL HOLLERICH: Certainly. This is the Good News! And I would like to add: everyone is called. No one is excluded: even the divorced who remarried, even homosexuals, everyone. […] Sometimes in the Church there are discussions on these groups’ accessibility to the Kingdom of God. And this creates the perception of the exclusion of part of the People of God. They feel they are excluded, and this is not fair! […]

However, objectively, there is a theological problem. You yourself have referred to this in past interviews, hoping for a reconsideration of doctrine.

CARDINAL HOLLERICH: […] Many of our brothers and sisters tell us that, whatever may be the cause of their sexual orientation, they definitely did not choose it. They are not “rotten apples.” They too are the fruit of creation. And in Bereshit, we read that at each step of creation, God was pleased with his world and said, “…and he saw that it was a good thing.” Having said this I want to be clear. I do not think there is room for a sacramental marriage between people of the same sex because there is no procreative goal that distinguishes it, but this does not mean that their affective relationship has no value.