Before this year’s March conclave, but also before the 2005 conclave, some Argentinians circulated a dossier accusing the archbishop of Buenos Aires of collaboration with the military regime in the 1970s. The media amplified these rumors even after the election of Cardinal Jorge Bergoglio as Bishop of Rome. The rumors originated for the most part from the accusations leveled by Horacio Verbitsky, a journalist with a controversial past. Verbitsky alleged that the then-Jesuit provincial, during the years of the junta that ruled Argentina from 1976 to 1983, did nothing to save two of his brother Jesuits, Orlando Yorio and Franz Jalics, from arrest and detention. The media brought up this topic every so often even though the Argentinian magistracy had cleared Bergoglio, and the well-known human rights activist and Nobel Prize winner Maria Adolfo Perez Esquival firmly ruled out the idea that Pope Francis had collaborated with the dictatorship. 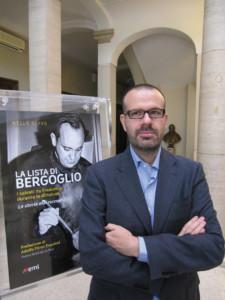 In order to find out more about Fr. Bergoglio’s activity in the years of the military dictatorship, Nello Scavo, an Italian journalist on the editorial staff of the daily L’Avvenire, went to Argentina to conduct an investigation. His inquiry provided material for a book significantly entitled La lista di Bergoglio. I salvati da Papa Francesco. Le storie mai raccontate (“Bergoglio’s List. The People Saved by Pope Francis. The Never-Before Told Story”), published in Italy in October. The title refers to Schindler’s list, since the author collected testimony from people who managed to avoid arrest, torture, and sometimes even death with the help of the former Jesuit provincial. According to Scavo, Father Bergoglio saved more than 100 people from persecution.

I caught up with the author at the presentation of his book at the headquarters of the Jesuit magazine Civiltà Cattolica.

How did you come up with the idea of writing a book about the people saved by Jorge Mario Bergoglio?

Nello Scavo: After finishing my first article on Pope Francis the evening of his election, I started a search on the internet, in books and old papers. There were disquieting rumors going around about the newly-elected Pope’s involvement with those responsible for the state-organized killings: 30,000 people had disappeared; more than 15,000 had been summarily executed; dozens of newborn babies had been taken away from their mothers, who were killed after giving birth to them; and 2 million or more had to go into exile. I could not just sit on a fence, and I must admit that I had my doubts about the choice made by the cardinal electors. But the following morning it had become clear to me that all accusations against Jorge Bergoglio were unfounded.

I was granted permission by the newspaper’s editor, Marco Tarquinio, to make further inquiries which, needless to say, involved the risk of my coming across something compromising for the new Pope’s reputation. Contrary to all expectations, our inquiry revealed new aspects of Fr. Bergoglio, and as we carried on with our search, traces began to surface of people rescued by the Jesuit provincial during the years of the military dictatorship. All that was left to do was to go to South America and investigate the past. That’s how La Lista di Bergoglio came about.

Military juntas seized power in Latin America when the world was divided into two blocs at the height of the Cold War. Argentina, too, was ruled by a military government from 1976 to 1983. This regime persecuted opponents on the pretext of fighting Communist guerrillas. How did Fr. Bergoglio, at the time provincial of the Jesuits, react to the crimes of the military dictatorship?

Scavo: I am neither a historian nor a philosopher, let alone a theologian. As a reporter, I am sure that one cannot ignore the past if one is to judge the present. There are still old scars which have not healed in Argentina. My book proves that Fr. Bergoglio chose to keep a low profile, which enabled him to save people whose lives were at risk. He detested the dictatorship, but if he had expressed his opinion, he would have faced the same destiny as other members of the clergy, like Bishop Angelelli, who was murdered in 1976, and above all, he could not have protected anybody.

What was his method for rescuing people (trade unionists, students, intellectuals, and priests) persecuted by the junta ?

Scavo: It is impossible to define it univocally. It mostly depended on the circumstances and needs of the moment. The then- Jesuit provincial generally hid runaways at the Collegio Maximo of San Miguel, about 30 kilometers from Buenos Aires. Then he introduced them to his religious brothers as young people on a spiritual retreat. During their “retreat,” Fr. Bergoglio devised, at very high personal risk, the best plan to keep them away from the military or make it possible for them to leave the country.

How many people do you think may have been saved by Fr. Bergoglio?

Scavo: It is very difficult to give a precise answer. Speaking prudently, I can say that he saved more than 100 people, even though other witnesses quote much higher figures. To these we must add those who were saved indirectly. In fact, by saving from arrest those who were wanted by the police it was possible to prevent them from giving their companions away under torture. Hundreds of other people were thus saved from abduction and forced disappearance.

Could you quote stories of people saved by the current Pope?

Scavo: There are many of these people and all of them have something surprising, like Alfredo Somoza, a journalist living in Italy. Even though he was neither a believer nor a baptized Christian, he found shelter in Buenos Aires; then he was secretly put aboard a cargo ship bound for Italy. There is Fr. Enriquez, who was protected by Jorge Bergoglio for a long time along with two seminarians. Their bishop had been murdered and they risked their lives, too. Now they are priests.

Did you also investigate the case of Yorio and Jalics, who were abducted, tortured and released only six months later?

Scavo: Yes, and, as I have written in my book, Fr. Bergoglio did everything to have them released. For the first time I have published a confidential dossier stating that there is nothing against Jorge Bergoglio. Jalics himself – Yorio died some years ago – admitted that after making inquiries, he gained incontrovertible evidence that Fr. Bergoglio managed to have them released at a time when escaping from a torture center alive was almost impossible.

You came into possession of unpublished documents like the transcription of the interrogation of Cardinal Bergoglio in the presence of judges investigating the crimes committed by the dictatorship. What does that document reveal?

Scavo: That interrogation contains the clues leading to  . He himself explained to the judges how he had exerted himself, even devising stratagems, to get information on people who had been abducted and to act accordingly. During his deposition Cardinal Bergoglio did not sidestep any question, proving that he had nothing to hide.