Sister Antonietta Colacchi – Nun of the Daughters of Charity of St. Vincent de Paul and Director of the Dispensary of Santa Marta

Sister Antonietta Colacchi – Nun of the Daughters of Charity of St. Vincent de Paul and Director of the Dispensary of Santa Marta 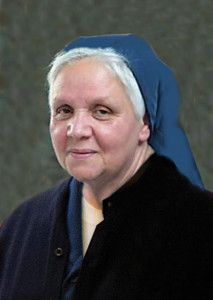 “Our days are marked by the joy of being a Christian, by the brightness of a smile, and by the warmth of gratitude!” Sister Antoinetta Colacchi said to Pope Francis on December 14 when the Pope visited the Dispensary of Santa Marta in Vatican City, which she directs. The dispensary is a small clinic tucked just inside the walls of the Vatican. It serves primarily poor immigrant children who find it difficult to obtain good medical care in Italy. For the Pope, the trip was quite short. The dispensary is just across the street from the Domus Sanctae Marthae, where the Pope lives. The sisters who run the dispensary are from the same order as the sisters who care for the Pope’s residence — the Daughters of Charity of St. Vincent de Paul. For her quiet, humble work in caring for these children, and as a representative of all who care for the poor, weak and needy, we honor Sister Antoinetta as one of our “Top Ten” people of 2013.

Sister Antoinetta is the latest in a long line of nuns who have directed and managed this structure hidden within the walls of the Vatican.

Pope Francis visited the Pediatric Dispensary of Santa Marta on a Saturday morning in December. Then, at the Paul VI Hall, he met the children cared for at the Dispensary, along with their families and the volunteers who, every day, serve in the charitable institution.

The children surprised the Holy Father with a small party ahead of his 77th birthday (December 17), giving him a cake and a sweater.

“I thank you for this visit,” the Pope said. “Thank you for the love you have, the joy of these children, the gifts, the cake… It was beautiful! Later I’ll tell you whether it was good or not. Thank you so much! May the Lord bless you.” Then he affectionately greeted the children one by one.

The Pope was greeted by Sr. Antonietta, and by a mother from Peru.

Sister Antonietta said “the Dispensary of Santa Marta has a long history, with more than 90 years of solidarity spent in serving those people who too often seem invisible to the eyes of the world.” 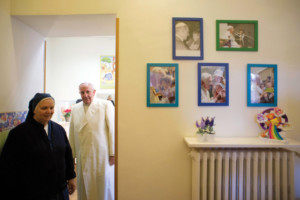 Sister Colacchi during Pope Francis’ visit to the Santa Marta Dispensary at the Vatican December 14.

Since its founding in 1922, under Pope Pius XI, the Dispensary has assisted thousands of children, along with their families.

The children are given periodic check-ups and specialized consultations, which are also provided for their mothers.

“This symphony of love,” Sr. Antonietta said, “is made possible thanks to the voluntary work of doctors — paediatricians, obstetricians, sonographers, dermatologists, dentists — and the many workers who offer their time, passion and tenderness. Divine Providence ensures that we do not lack His support, by multiplying charity every day in our hands.

“We work to globalize solidarity and love, rather than indifference and selfishness.

“In this time of Advent, pregnant with hope for the coming of the Messiah, once more we turn our gaze to a family in need, abandoned by men to their fate, but we see above all the trust in the will of the Heavenly Father and cultivate an awareness that in His design is imprinted the touch of an artist completing a masterpiece.”

Sister Antonietta always has a smile for everyone. She is a mother not only to the children but also to the volunteers, about 50 of them.

“All we ask is a letter from the local pastor advising us of the family situation,” Sr. Antonietta said. “Even if they are not Catholics or Christians. We care for them all. Then we create a card for physicians who work here as volunteers. And so the children are cared for after weaning. Their mothers are often alone. For this there is also a gynecological service. Some of them are particularly in need of love. Their only strength is in their children. And this is the way to create a family sometimes. “

The goodness of the people is the real strength of the Dispensary. The rooms are small but full of colors, games, drawings and love, which makes possible the miracle of hospitality. The stories of life and faith are intertwined. “But we never ask too much,” says Sr. Antonietta. “We just want to love the children. Ours is a multi-faceted family that bears the colors of the world but also the signs of the difficulties and contradictions of today’s society.”

On July 3, 2008, Benedict XVI decided that the dispensary should become a Foundation under the protection of the papacy. Pope Benedict XVI had visited the children of the dispensary on the Feast of the Holy Family in 2005. In family photos one can see Pope Paul VI distribute meals, and even a young Don Alfred Xuereb, secretary of Benedict XVI and now of Francis, who for years was the spiritual guide of the Dispensary.