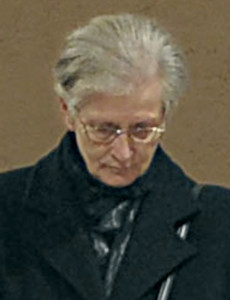 Though few in the general public have heard of her, those few believe that many of the books by Joseph Ratzinger, both before he became Pope, and since, would not have been written without her help. She is one of the Pope’s closest and most trusted collaborators and advisors, and for the quiet, cheerful, steady assistance that she has given to him, and through him, to the Church, for more than a quarter century, we honor her as one of our “People of the Year” for 2011.

Birgit Wansing is a consecrated woman (a laywoman who has consecrated her life to God, but not a nun). She belongs to the Schönstatt movement, which was started in 1914 in a small Marian sanctuary in the Rhine valley in Germany, and is today found in 80 countries throughout the world.

Her interests are very wide-ranging. (Some years ago, she wrote an essay for Osservatore Romano condemning animal cruelty as incompatible with Christianity.) Discreet, thoroughly German, she appears to be just one more among the many people working in the Vatican. She lives very simply (her face lights up with a sunny smile if one greets her) and this simplicity means she is rarely “noticed.” (More well-known is the bustling Ingrid Stampa, since 1991 Benedict’s other close lay confidant and advisor, first at the Congregation for the Doctrine of the Faith and then as personal assistant to the Pope. Ingrid, an academic, is, like Birgit, a lay affiliate of the Schoenstatt Sisters of Mary, and has now been integrated into the German section of the Secretariat of State, where she takes care of the Italian translation of many of the writings of Pope.)

Birgit is not a theologian but a musician, translator and protector of the Pope’s health. For nearly 25 years, she has had one very special job: she has transferred onto a computer the hand-written rough drafts of Joseph Ratzinger’s writings.

Since he was a professor, Benedict XVI likes to write by hand, in pencil. He does not even use a typewriter. His texts are often the transcripts of lectures and conferences that he revises before publication. This is where Birgit enters the creative process. She deciphers the tiny handwriting and makes it readable to editors and translators. Her work is a quiet and discreet job that began when Joseph Ratzinger was Prefect of the Congregation for the Doctrine of the Faith.

Another area that Birgit takes care of with patience is to upgrade the vast bibliography of Joseph Ratzinger-Benedict XVI. Many of the students of Ratzinger Schülerkreis turn to her for specific research, and her name appears in the acknowledgments of many doctoral theses alongside that of the Pope’s secretary, Monsignor Georg Gänswein.

Every morning the Pope’s day begins with a meeting with Birgit before the usual work with the secretariat, especially in these recent months, which Benedict XVI has spent working on the final draft of his third book on Jesus dedicated to the childhood Gospels. Before passing the text to Ingrid Stampa, who now works in the Secretariat of State, and to translators for other languages, Birgit prepares the text and the bibliography that the Pope approves. For the first two books, there were 1,000 pages to write and rewrite.

Birgit is therefore part of the Pope’s inner circle and seems to have an excellent relationship with the four Memores Domini who run the papal household, and with Sister Christine Felder, who accompanies the brother of the Pope when he is in Rome.

For this reason it was quite normal to see her with Carmela, Lore­dana and Christina last year when Manuela, one of the Memores, died tragically in a car accident. Birgit was in the front row when the Pope came to give his last respects to Manuela in the Church of St. Stephen of the Abyssinians in the Vatican. Now the Memores are four again after the arrival of Rossella and the “family” is again complete. (Ingrid instead seems to participate less in the daily life of the “apartment.”)

Birgit and Ingrid supervised, with don Georg, the transfer of Ratzinger’s library from his apartment in the Piazza della Città Leonina to the Apostolic Palace. Neither lives in the apartment next door to the Pope, where the Memores reside, or upstairs where the Pope’s personal secretaries live, but both live in the Vatican and are formally part of the Secretariat of State.

In 2005, when the newly-elected Pope went to visit his old colleagues at the Congregaation of the Doctrine of Faith, Birgit Wansing was still among them. Then-Archbishop Angelo Amato, despite his joy at the election of his boss, with whom he would no longer work, said: “Besides him, we have also lost a valuable employee in Monsignor Gänswein, and, I’m afraid — so to speak — that even our talented colleague Birgit Wansing, who for many years worked in the office of Cardinal Ratzinger, is about to change palaces…”