“The Voice Of The Church Must Be Prophetic”

“The Voice Of The Church Must Be Prophetic”

Your Holinesses and Beatitudes, Your Eminences and Graces, Dear Brothers and Sisters, Esteemed Delegates of the Assembly,

The World Council of Churches has a long and rich history. Set up after the Second World War, the Council responded to the expectations of Christians of various confessions who strove to meet, to get to know each other and to work together… 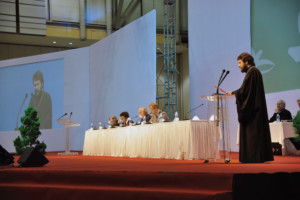 Metropolitan Hilarion during his November 1 speech in South Korea.

The World Council of Churches today remains a unique instrument of inter-Christian cooperation that has no analogy in the world. However, the question arises as to how effective this instrument is. We must note with some regret that, in spite of all of the efforts aimed at bringing Christians of various confessions closer to each other, within Christendom not only are the divisions of the past not disappearing, but new ones are arising.

The contemporary situation demands from us more decisive action, greater cohesion and more dynamism. And yet it also demands a re-orientation of the basic direction of our work, a change in priorities in our discussions and deeds. While we continue to discuss our differences in the comfortable atmosphere of conferences and theological dialogues, the question resounds ever more resolutely: Will Christian civilization survive at all?

In my address I would like to focus on two fundamental challenges which the Christian world today faces in varying degrees. The first is that of the militant secularism which is gathering strength in the so-called developed countries, primarily in Europe and America. The second is that of radical Islamism that poses a threat to the very existence of Christianity in a number of regions of the world, mainly in the Middle East, but also in some parts of Asia and Africa.

Militant secularism in Europe has a long history, going back to the period of the French Revolution. But it is only in the 20th century in the countries of the so-called socialist bloc that godlessness was elevated to the level of state ideology. As regards the so-called capitalist countries, they preserved to a significant degree the Christian traditions which shaped their cultural and moral identity.

Today these two worlds appear to have changed roles.

In the countries of the former Soviet Union, in particular in Russia, Ukraine, Belorussia and Moldavia, an unprecedented religious revival is underway. In the Russian Orthodox Church over the past 25 years there have been built or restored from ruins more than 25,000 churches. This means that a thousand churches a year have been opened, i.e., three churches a day. More than 50 theological institutes and 800 monasteries, each filled with monks and nuns, have been opened.

In Western European countries we can observe the steady decline of the numbers of parishioners, a crisis in vocations, and monasteries and churches being closed. The anti-Christian rhetoric of many politicians and statesmen becomes all the more open as they call for the total expulsion of religion from public life and the rejection of the basic moral norms common to all religious traditions.

The battle between the religious and secular worldview is raging today in academic auditoriums and on the pages of newspapers. And the subject of the conflict is far from being exhausted by the question of belief or lack of belief in God. Today this clash has entered a new dimension and touches upon the fundamental aspects of the everyday life of the human person.

One of the main directions of its activity today is the straightforward destruction of traditional notions of marriage and the family. This is witnessed by the new phenomenon of equating homosexual unions with marriage and allowing single-sex couples to adopt children. From the point of view of biblical teaching and traditional Christian moral values, this testifies to a profound spiritual crisis. The religious understanding of sin has been conclusively eroded in societies that until recently thought of themselves as Christian. Particularly alarming is the fact that we are dealing in this instance not only with a choice of ethics and worldview. Under the pretext of combating discrimination, a number of countries have introduced changes in family legislation. Over the past few years single-sex cohabitation has been legalized in a number of states in the USA, a number of Latin American countries and in New Zealand. This year homosexual unions have attained the legal status of “marriage” in England and Wales and in France.

We have to state clearly that those countries that have recognized in law homosexual unions as one of the forms of marriage are taking a serious step towards the destruction of the very concept of marriage and the family. And this is happening in a situation where in many historically Christian countries the traditional family is enduring a serious crisis: the number of divorces is growing, the birthrate is declining catastrophically, the culture of a family upbringing is degraded, not to mention the prevalence of sexual relations outside of marriage, the increase in the number of abortions and the increase of children brought up without parents, even if those parents are still alive.

Instead of encouraging by all means possible traditional family values and supporting childbirth not only materially but also spiritually, the justification of the legitimacy of “single-sex families” who bring up children has become the center of public attention. As a result, the traditional social roles are eroded and swapped around. The notion of parents, i.e., of the father and the mother, of what is male and what is female, is radically altered. The female mother is losing her time-honored role as guardian of the domestic hearth, while the male father is losing his role as educator of his children in being socially responsible. The family in its Christian understanding is falling apart to be replaced by such impersonal terms as “parent number one” and “parent number two.”

All of this cannot but have the most disastrous consequences for the upbringing of children. Children who are brought up in families with “two fathers” or “two mothers” will already have views on social and ethical values different from their contemporaries from traditional families.

One of the direct consequences of the radical reinterpretation of the concept of marriage is the serious demographic crisis which will only grow if these approaches are adhered to. Those politicians who are pushing the countries of the civilized world into the demographic abyss are in essence pronouncing upon their peoples a death sentence.

What is to be the response of the Christian Churches? I believe deeply that this response can be none other than that which is based on Divine Revelation as handed down to us in the Bible. Scripture is the common foundation which unites all Christian confessions. We may have significant differences in the interpretation of Scripture, but we all possess the same Bible and its moral teaching is laid out quite unambiguously. Of course, we differ in the interpretation of certain biblical texts when they allow for a varied interpretation. Yet much in the Bible is stated quite unambiguously, namely that which proceeds from the mouth of God and retains its relevance for all subsequent ages. Among these divine sayings are many moral commandments, including those which concern family ethics.

Unfortunately, not all Christian Churches today find within themselves the courage and resolve to vindicate the biblical ideals by going against that which is fashionable and the prevalent secular outlook. Some Christian communities have long ago embarked on a revision of moral teaching aimed at making it more in step with modern tendencies.

It is often said that the differences in theological and ethical problems are linked to the division of Christians into conservatives and liberals. One cannot but agree with this when we see how in a number of Christian communities a headlong liberalization is occurring in religious ethics, as a rule under the influence of processes taking place in secular society. At the same time the witness of the Orthodox Churches should not be reduced to that of conservatism. The faith of the Ancient Church which we Orthodox confess is impossible to define from the standpoint of conservatism and liberalism. We confess Christ’s truth which is immutable, for “Jesus Christ is the same yesterday, and today, and for ever” (Heb. 3:8).

We are not speaking about conservatism but of fidelity to Divine Revelation which is contained in Scripture. And if the so-called liberal Christians reject the traditional Christian understanding of moral norms, then this means that we are running up against a serious problem in our common Christian witness. Are we able to bear this witness if we are so deeply divided in questions of moral teaching, which are as important for salvation as dogma?

In this regard, I would like to speak about the Church’s prophetic vocation. I recall the words of Fr. Alexander Schmemann who said that a prophet is far from being someone who foretells the future. In reminding us of the profound meaning of prophecy, Schmemann wrote: “The essence of prophecy is in the gift of proclaiming to people God’s will, which is hidden from human sight but revealed to the spiritual vision of the prophet” (Schmemann, The Celebration of Faith, Vol. 1: I Believe…, p. 112).

We often speak of the prophetic voice of the Churches, yet does our voice actually differ much from the voice and rhetoric of the secular mass media and non-governmental organizations? Is not one of the most important tasks of the WCC to discern the will of God in the modern-day historical setting and proclaim it to the world? This message, of course, would be hard to swallow for the powerful of this world. However, in refusing to proclaim it, we betray our vocation and in the final run we betray Christ…

One of the important directions of the WCC’s work is interreligious dialogue. I believe that we ought to pay more attention to the development of a deep and interested mutual interaction with traditional religions, especially with Islam.