Our “Inalienable dignity” is the “foundation of all social life” 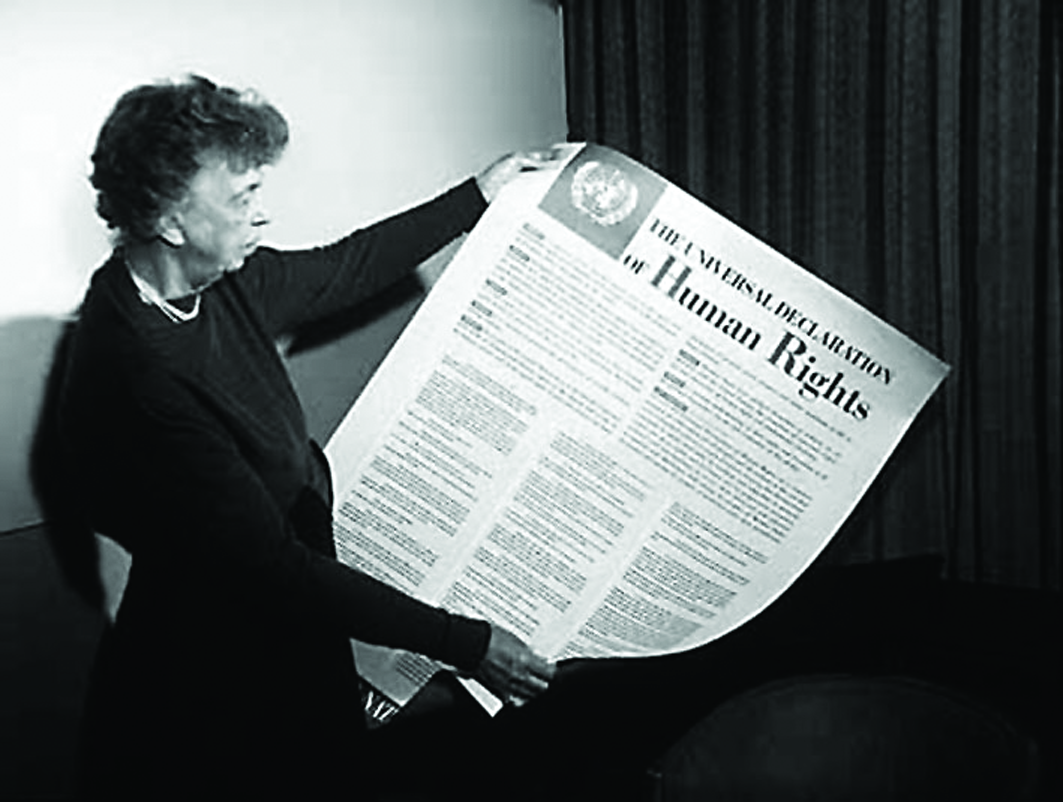 Pope Francis has praised the Universal Declaration of Human Rights as a powerful defense of the principle of the inalienable dignity of the human person. In the photo, Eleanor Roosevelt, who was a promoter of the Declaration, which was approved by the UN on December 10, 1948

Pope Francis told an August 12 general audience that Christian faith demands conversion from individualism and a commitment to defending the inherent dignity of every person.

“While we work for the cure of a virus that affects everyone without distinction, faith urges us to work seriously and actively to fight indifference in the face of violations of human dignity,” Pope Francis said.

“We want to recognize the human dignity in every person, whatever his or her race, language or condition might be,” the pope said at his general audience.

Speaking via live stream from the library of the Vatican’s apostolic palace, Pope Francis emphasized that this “renewed awareness of the dignity of every human being has serious social, economic and political implications.”

He said that the pandemic has “shed light on broader social ills,” including “a distorted view of the person” that ignores human dignity and “fosters an individualistic and aggressive throwaway culture, which transforms the human being into a consumer good.”

“In the light of faith, we know, instead, that God looks at a man and a woman in another manner. He created us not as objects but as people loved and capable of loving; He has created us in His image and likeness. In this way He has given us a unique dignity, calling us to live in communion with Him, in communion with our sisters and our brothers, with respect for all creation,” Pope Francis said.

“The pandemic has highlighted how vulnerable and interconnected we all are. If we do not take care of each other, starting with the least, with those who are most affected, including creation, we cannot heal the world,” he said.

In recent months, Bachelet, the former president of Chile, has spoken out about child marriage in Somalia, human rights violations in Yemen, and the Iranian government’s repression of civil society.

The UN High Commissioner for Human Rights’ spokesperson has also expressed concern over the application of China’s National Security Law in Hong Kong and Lebanon’s socio-economic crisis. The Vatican has not released further details of the content of the pope’s meeting with Bachelet.

Pope Francis had said at his general audience that humans have “inalienable dignity” because humanity was created in the image of God, quoting the Second Vatican Council’s pastoral constitution, Gaudium et Spes. He said that this lies at “the foundation of all social life and determines its operative principles.”

“In modern culture, the closest reference to the principle of the inalienable dignity of the person is the Universal Declaration of Human Rights, which Saint John Paul II defined as a ‘milestone on the long and difficult path of the human race’ and as ‘one of the highest expressions of the human conscience,’” Pope Francis said.

“Rights are not only individual but also social; they are of peoples, nations. The human being, indeed, in his or her personal dignity, is a social being, created in the image of God, One and Triune,” he said. “We are social beings; we need to live in this social harmony, but when there is selfishness, our outlook does not reach others, the community, but focuses on ourselves, and this makes us ugly, nasty and selfish, destroying harmony.”

The pope’s reflection on human dignity is part of a weekly series of catechesis on Catholic social teaching, which he began the previous week. Pope Francis said that he wants to “tackle together the pressing issues that the pandemic has highlighted, especially social diseases.”