The Pastoral Geopolitics of the Domus Sanctae Marthae

The Pastoral Geopolitics of the Domus Sanctae Marthae

The first months of Pope Francis’ pontificate and the new view of the Vatican and the Church. The text was first published on the Il Sismografo website on December 20.

Geopolitics is synthetically, but appropriately, referred to as the discipline dealing with the relation between politics and geography. Also, a country’s foreign policy is deeply affected by its geographic position. These two concepts help us to understand the strategic relevance of Pope Francis’ decision to live and work at the Domus Sanctae Marthae.

Taking stock of the first months of Jorge Bergoglio’s pontificate, we can see how the Domus has been the starting point of many things which can be listed among the great events of the year. Why? Because to Pope Francis the Domus Sanctae Marthae is more than a simple residence. It is a ground-floor window from which one can see people’s faces, which, as the main events of this year have proved, marks a turning point in the pontificates of these last centuries. 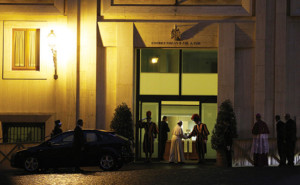 Pope Francis greets a Swiss Guard as he arrives at the Domus Sanctae Marthae at the Vatican Oct. 24 (CNS photo).

Pope Francis’ choice of Domus Sanctae Marthae is at the basis of his new and in many respects surprising attitude. Living at Domus Sanctae Marthae, as Cardinal Jorge Mario Bergoglio did as one of the 115 cardinal electors, is in itself nothing special, even though it made headlines especially after centuries of various pontifical residences in Rome and the Vatican as a result of the Popes’ restlessness since the 4th century.

The peculiarity of Pope Francis’ choice could be summed up as follows: Domus Sanctae Marthae commands a view of everything, of the horizon, the Vatican, the Church and the world, which is quite different from the view commanded by the Apostolic Palace, from where people look like small moving dots, as a Pope once said.

So, in geopolitical terms, a country’s geographic position affects its policy, even though in this case it would more appropriate to talk of governance or pastoral action. There is a center and a periphery in the world as well as in mankind, so that points of view vary according to geographic position, because this determines closeness, remoteness, sharpens or blunts sensitivity, turns a small moving point into a smile, into a pain or joy… into a real human being. Domus Sanctae Marthae is, in a way, a peculiar “peripheral” area within the heart of the Church, and as Pope Francis points out, “reality is sometimes better understood from the periphery than it is from the center” (26 May 2013).

In an interview given to Civiltà Cattolica the Pope offered this enlightening reflection: “I chose to live here in room 201 because when I took possession of the Papal Apartments I felt a distinct sense of refusal. The residence in the Apostolic Palace is not luxurious. It is large and made with good taste, but not luxurious. But in the end it is like a funnel turned upside down. It is large, but the entrance is narrow. Only one person at a time can get in and I cannot live alone. I must live my life with others.” Domus Sanctae Marthae thus ensures and makes easier what we could now refer to as Pope Francis’ geopolitical community, which is based on one irreplaceable key point: “Living my life, even as a pope, with others … because I cannot live alone.” He could not have given a more exhaustive and incontrovertible explanation or justification.

A pope living in isolation, with few and formal social and human relations, is different from a pope with constant, spontaneous and diversified human contacts which require little mediation. It is something applying to anyone, not just to a pope. The difference between the first and the second situation is determined by the place the Holy Father has chosen as his residence, i.e. Domus Sanctae Marthae. The Pope has a house and an office there and works in both of them without distinction. In Domus Sanctae Marthae Pope Francis meets many people, both laymen and clergymen, and among these latter, missionaries, resident cardinals, cardinals of the Curia, bishops, archbishops from every country and continent and lots of ordinary people. He meets people in the hall, on the lifts, in the chapel and refectory. He can have lots of informal audiences in one day. The people he meets and talks to are like “ears and eyes” on the world.

Finally, Domus Sanctae Marthae hosts a cosmopolitan and dynamic community which changes all the time, something quite different from the funnel turned upside down referred to by the Pope. Therefore, taking stock of 2013, we realize that Domus Sanctae Marthae is more than an important place also because it is the place from where Pope Francis spreads his deep, timely and essential teachings, which everyone can understand: it is another way to keep in touch with the world day by day.

Cardinal Bergoglio often repeated: “One does not love concepts or ideas. One loves people” (7 September 2008). These words say a lot about Pope Francis.