There is a correct relationship that a Christian should have with money, with wealth. This was the focus of Pope Francis’ reflection during Mass at Santa Marta on Thursday, 19 May, wherein he denounced modern slavery and those who, taking advantage of widespread unemployment exploit people, forcing them to accept unfair contracts. Such traffickers “fatten themselves on wealth” and live like “true leeches” off of people’s blood. “And this”, he stated harshly, “is a mortal sin”.

The Pontiff’s reflection began from the reading taken from The Letter of James (5:1-6), a passage which the Pope described as “a little strong”. Evidently, Francis pointed out, “the Apostle understood the danger there is when a Christian allows himself to be controlled by wealth”. Therefore, in his text, James “doesn’t mince words: he is direct and clear”, when he writes: “now, you rich, weep and howl for the 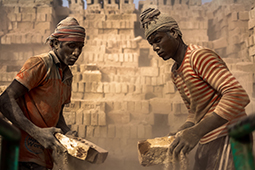 miseries that are coming upon you. Your riches have rotted and your garments are moth-eaten”. What, the Pontiff asked, “must a rich man think when he hears this?”. Truth be told, Francis explained, if we look at “what the Word of God teaches about riches”, we understand that “riches in and of themselves are good things”, in so much that God himself assigns man the task to prosper (“Be fruitful and multiply, fill the Earth, subdue it”). In the Bible we also “find many righteous rich men”. The Pontiff recalled a few: of Job, for example, there is a list “of all the treasures God gives him”; but we can also recall Tobias, and Susanna’s husband Joachim. “The Lord gives wealth as a blessing” to many.

Thus, “riches are good”, but, Francis added, they are also “relative”. In fact the Lord “praises Solomon for asking not for wealth but for wisdom of heart in order to judge his people”. Riches, in other words, “are not something absolute”. Some people, the Pope said, believe “in what is called the ‘theology of prosperity’”, that is, that God shows you that you are just if he gives you lots of riches”.

But this “is a mistake”, and thus the Psalmist says: “set not your heart on riches”. This is precisely the problem that affects each of us: “is my heart set on riches or is it not? What is my relationship with wealth?”. In this regard Jesus “speaks of ‘serving’: you cannot serve God and riches; they are opposed. In themselves they are good, but if you prefer to serve God, riches come in second place: the right place”. To better explain, the Pope recalled the Gospel episode of the “rich youth whom Jesus loved, because he was just”. The young man “was good but attached to riches and these riches in the end became for him the chains that took away his freedom to follow Jesus”.

It is the same problem that James faces in his Letter, where “he looks at those who almost consider riches as god” and who “live for wealth!”. The Apostle harshly writes to them: “Your gold and silver have rusted, and their rust will be evidence against you and will eat your flesh like fire. You have laid up treasure for the last days”. In order to clarify that “these people had a bad relationship with treasure”, James used words which, the Pontiff emphasized, seem to be written by someone living “in one of our cities in the world today: ‘Here, the wages of workers who have harvested your lands and whom you have not paid, cry out, and the protests of the harvesters have reached the ears of the Almighty Lord”. He points the finger, in other words, at those situations in which “wealth is made by exploiting people” and “those poor people become slaves”. At this point Francis asked us to think about the world today, where “the same thing happens” to those who, for example, are contracted to work “from September to June, with no opportunity for a pension, without health insurance”, and are then suspended during the summer months, as if in July and August they live on air. Then it starts again in September. Those who do the, the Pope stated clearly, “are true leeches and live off of the blood drained from people” who provide slave labour.

The Apostle James referred to the work of harvesters, today more generally, we understand “slave labour”. In this regard the Pontiff recounted the story of a girl who was offered, under the table, 11-hour work days for a monthly wage of 650 euros a month. When she protested they told her: “Look at the line behind you. If you want it, take it, if no, leave. There are others waiting”. These wealthy people, Francis commented, “fatten themselves on wealth” and seem to be the very people about whom the Apostle writes: “You have fattened your hearts in a day of slaughter”. Turning ideally to them the Pope added: “The blood you have sucked from these people” is “a cry to the Lord, it is a cry for justice”.

Those who behave in this way, the Pontiff said, are “traffickers” and “do not realize it”. He then explained that “we used to think that slaves no longer existed”, but indeed, “they exist. It’s true, people are not going and taking them from Africa to sell them in America, no. But in our cities” and in the “exploitation of people, the exploitation not only of children, of young people, but of all people”, who in their labour are treated “unjustly”.

Reflecting on these themes, the Pope also recalled the catechesis of the General Audience of the preceding day, dedicated to the rich glutton and Lazarus. The rich man, Francis said, “was in his own world, he did not notice that on the other side of the gate to his house was someone who was hungry” and “he let the other man die”. Here however, the Pope emphasized, there is something “worse”: here we see that people go hungry while others profit from their work! “Living off of the blood of the people. And this is a mortal sin. It is a mortal sin. It requires a great deal of penitence, a great deal of restitution to be converted from this sin”.

In support of the harsh words of the Apostle James there was in the day’s liturgy also Psalm 48, “a beautiful, calm meditation, on poverty” — ‘Blessed are the poor in spirit, for theirs is the Kingdom of Heaven’”, where we read very “clearly” about the rich that “straight to the grave they descend, and their form shall waste away; Sheol shall be their home”.

Here, the Pontiff told another brief anecdote, recalling “a miserly man” about whom the people quipped when he died: “‘The funeral was ruined’ — ‘Why?’, they said. ‘They couldn’t close the coffin’ — ‘Why?’ — ‘Because he wanted to take all he had with him, and couldn’t’”. No one, Francis said pointedly, “can take their treasure with them”.

Concluding the homily, the Pope asked again that we think about “this modern-day tragedy: the exploitation of people”. Not only trafficking relating to prostitution or child labour, but “the trafficking more — so to speak — ‘civilized’”, for which there are those who say: “I’ll pay you up to this point, without vacation, without health insurance, everything under the table… this way I get rich!”. Recalling the passage of the day’s Gospel (Mk 9:41-50), he prayed that the Lord might “make us understand today the simple thing that Jesus tells us in today’s Gospel passage: a cup of water in the name of Christ is more important than all the wealth accumulated through the exploitation of people”.