With the tears of father and mother

With the tears of father and mother

In the face of today’s disasters, wars motivated by the worship of the god of money, the bombing of innocent people, a humanity which apparently does not desire peace, God weeps with the tears of a father and mother.

In relation to this theme, Pope Francis issued a forceful call to conversion during Mass on Thursday morning, 27 October, in the chapel of the Casa Santa Marta, during which he said that God became Man in order to cry with and for his children.

Centering his reflection on the day’s Gospel (Lk 13: 31-35), the Pope said it “appears that Jesus had lost his patience, and he uses forceful words: it is not an insult, but neither is it a compliment to call a person ‘fox’”. He uses this term when speaking to the Pharisees about Herod: “Go and tell that fox”. However, there had been “other occasions in which Jesus spoke severely”: for instance, he had spoken of the “evil and adulterous generation”. He had even referred to the disciples as “hard of heart” and “foolish”. In Luke’s account, Jesus summarizes “what will happen: ‘I must go on my way today and tomorrow and the day following; for it cannot be that a prophet should perish away from Jerusalem’”. Essentially, the Lord “says what will happen, he prepares to die”. 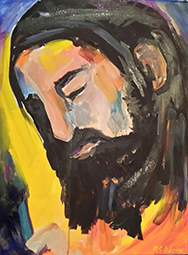 However, “then Jesus quickly changes his tone”, Francis observed. “After this very strong outburst”, in fact, “he changes his tone, and looks to the people, and upon the city of Jerusalem: “Jerusalem, how often would I have gathered your children together as a hen gathers her brood under her wings!’”. This is “the tenderness of God, the tenderness of Jesus”. That day, he “wept over Jerusalem”. However, “those tears of Jesus”, the Pope explained “were not the tears of a friend before the tomb of Lazarus; those were the tears of a friend before the death of another”. Instead, “these are the tears of a father who weeps; it is God the Father who weeps here in the person of Jesus”.

“Someone said that God was made man in order to be able to mourn for what had been done to his children”, the Pontiff said. Thus, the “tears before the tomb of Lazarus are the tears of a friend”. However, the tears recounted in the passage from Luke’s Gospel are the “tears of the Father”. Francis recalled the attitude of the “father of the Prodigal Son, when the younger son asked for his inheritance, and then left”. And “this father is certain, he did not go to his neighbours and say: ‘Look at what happened to me, what this poor wretch did to me, I condemn this son!” No, he does not do this”. Instead, the Pope said, “I am certain” that father “went away to weep alone”.

While the Gospel does not give an account of this detail, Francis said, it nonetheless shows that “when the son returns, he sees the father from afar: this indicates that the father would continuously go up to the terrace to watch out for his son’s return.” And “a father who does this is a father who lives in tears, waiting for the return of his son”. These are the “tears of God the Father; and with these tears the Father recreates, in his Son, all of creation.”

“When Jesus went with the Cross to Calvary”, the Pontiff recalled, “the pious women wept, and he said to them: “Do not weep for me, weep for your children”. These are the “tears of a father and mother, which God also continues to shed: even today, faced with disasters, wars which are conducted out of the worship of the god of money, of many innocent people murdered by bombs which are launched by worshippers of the idol of money”. Thus, “even today the Father weeps, and even today says: “Jerusalem, Jerusalem, my children, what are you doing?”. And “he says this to the poor victims, as well as to arms traffickers, and all those who sell the lives of people”.

In conclusion, Francis suggested that the faithful;

“think about how God was made man in order to be able to weep. And we wold do well to think that God our Father today weeps: he weeps for this humanity which does not end, to understand the peace which he offers us, the peace of love”.