The Resurrection: A Criminal Investigation…

The Resurrection: A Criminal Investigation… 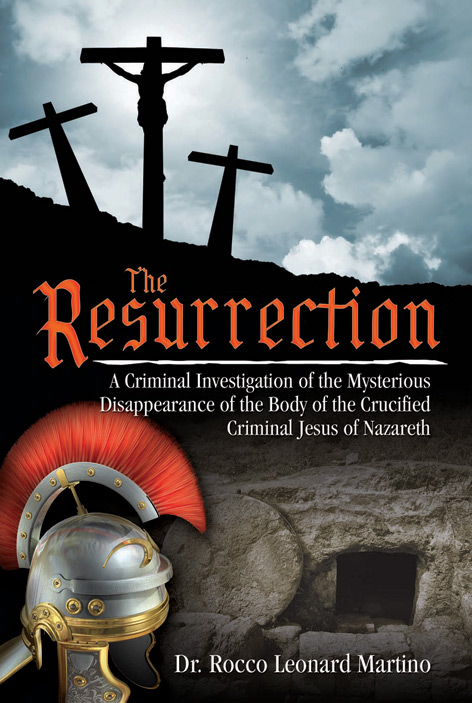 I had been invited to create an audio version of Dr. Rocco Leonard Martino’s new novel, The Resurrection: A Criminal Investigation of the Mysterious Disappearance of the Body of the Crucified Criminal Jesus of Nazareth. Doing my usual research on a subject I don’t think about quite as much as I should, I found myself caught up in the subject matter as Dr. Martino had chosen to treat it. As the story unfolds, the tension-laden investigative process drives the sequence of events forward. For those of the Christian faith and many others, the outcome is known. Less well-known is the drama created by the gripping detail that Dr. Martino infuses into the scenes and dialogues that take place throughout the book. The novel took me to a deeper level of reflection and understanding. Here is an excerpt:

“Execute them all!” The Emperor Tiberius was angry. The news from Judea was ridiculous. What was that fool Pontius Pilate up to? What incredible nonsense in that last dispatch from Judea. The carpenter son of a virgin had risen from the dead after being crucified. Impossible. What fools would believe a fairy tale like that? The criminal was really innocent? What? Who would murder an innocent man? Was this an execution for state reasons or for private gain? How could Pontius Pilate allow such a mess to happen? Worse still, how could it now come to the attention of the Emperor? There must be a problem brewing. The followers of this risen criminal could be a threat to Pax Romana — the peace of Rome. Nonsense. He would send Tribune Quintus to find out what had taken place. His orders would be to investigate what happened, determine the best interests of Rome, and act accordingly. If need be, he could execute the whole lot, all the followers of the criminal, and even Pontius Pilate. “Send for Tribune Quintus,” he roared to his aide. 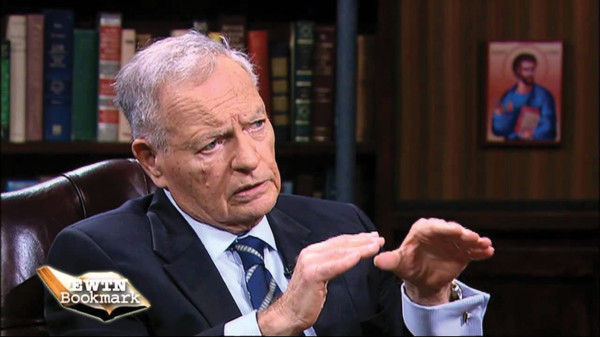 “Those who read this book should do so because its premises are fundamental to the beliefs of all Christians. Hence it is important for those who believe, and equally important for non-believers, to understand what Christianity is all about”.

So starts this gripping novel. Tribune Quintus Gaius Caesar is the co-head of the Praetorian Guard in Rome, possibly the illegitimate son of the Emperor, and a proven leader in battle. Summoned to Capri, the Emperor’s retreat, he is ordered to Judea. In Judea, Tribune Quintus investigates all aspects of the trial, execution, and after-death appearances of Jesus, aided by scores of Roman soldiers and three centurions. He interviews Pontius Pilate, the high priest Caiaphas, King Herod, Maryam the mother of Jesus, Lazarus who was purportedly raised from the dead by Jesus, the rumored lover of Jesus, Maryam Magdalene, Peter and the other eleven Apostles. Was it all a conspiracy, a fraud, using trickery and deceit, or was there something mysterious occurring?

From Pontius Pilate he learns that Saul has done a complete reversal and has now become a follower of the executed Jesus. No matter; the best interests of Rome must be determined and followed. Nothing must stand in the way of Rome. The followers of this Jesus must be quashed — extinguished totally — if they could be any threat to Rome.

This book is a narrative full of real-life exchanges between the familiar figures of Christianity and Judaism in the first century. If Jesus was innocent, why was he executed, and who engineered that murder? How can the strange behavior of Pontius Pilate be explained? Was Jesus a fraud, a trickster, or a true miracle maker? Was his body stolen from the tomb, or did he rise from the dead? Was Christianity founded on a big lie, or on reality? If real, how can it be explained?

The findings of an exhaustive investigation must be placed before the Emperor. The suspense-laden inquiry will keep the reader enthralled in this centuries-old mystery.

The Resurrection: A Criminal Investigation is the natural sequel to The Passion of the Christ.

As part of my preparation for creating an audio version of the book, I was able to speak to Dr. Martino at some length to try to put myself inside the head of the author and through him into the heads of the characters he created that I would try to bring to life for the listener.

Having done so, I highly recommend this book to any curious reader and listener, skeptical or not. It does not disappoint.

Dr. Martino wrote the The Resurrection: A Criminal Investigation after one of his four sons, Paul, challenged him to write a definitive book on the Resurrection of Jesus. He said that his sons “know me well enough to know that I am hard pressed to resist a challenge, especially one that involves my faith. Having read the book, Peter, another son, challenged me further to write a definitive book on the afterlife; a hugely important question and logical sequel to this book.”

Dr. Martino told me that when his son Paul issued his challenge, he realized that it would be fascinating to apply logic to the essential facts that form the basis of Christianity to see where that would take him. His life had been spent solving problems logically. In graduate school, he studied heat shields for the reentry of manned space vehicles. He then spent his professional career wrestling with unknowns, starting with the problem of finding a way to ensure the safe return of a spacecraft into the earth’s atmosphere. His faith in logic was rewarded, and since then man has safely explored the surface of the moon.

Dr. Martino is a Roman Catholic, and of Roman descent.

Dr. Martino thought that a book that seeks to apply logic to something that must ultimately be accepted as a matter of faith might strengthen that faith and spark thoughtful discussion among those who are quick to dismiss the conclusions reached by others who place their trust in faith. In other words, this exercise might result in appealing to the general public, whether in academic or more casual settings. In this quest, all the books he examined were scholarly research works more suited to colleges and seminaries than for the curious but casual reader. That, he said, led to his decision to write this book as a novel.

Dr. Martino believes that a work of fiction can often be more instrumental in telling a story than a heavily documented and researched tome that most will never read. Furthermore, he said, a novel presents a significant opportunity to interject human drama. Hence he chose to write a novel, true to the historical facts, but centered on the political machinations that surrounded the murder of Jesus.

The book was written for a wide audience: those seeking the truth, and those looking for a good mystery story.

Dr. Martino told me that he believes this book is suitable for primary and secondary school students, and the general public, as well as for the seminarian and even the ordained minister. He said, “It is a story, pure and simple. As one writer, Fulton Oursler, years ago stated, with the title of his book, it is The Greatest Story Ever Told.”

As a mystery story about history’s greatest mystery, Dr. Martino infuses the book with a sense of tension that propels the story forward and compels the reader’s curiosity to learn: what will happen next?

To meet his son’s challenge, Dr. Martino told me that he studied history carefully, examining different commentaries. Quintus, the Roman tribune sent by Emperor Tiberius, could have existed. Such a person might have been sent by Tiberius to discover what was really happening in Judea. His existence is plausible.

I asked Dr. Martino whether this had been a hard book to write, and he told me that there are scenes throughout the book that he truly enjoyed writing. In fact, he said, “I really wrote down the ‘play’ that I saw in my mind. The characters in history and in this novel are powerful people. The intersection between such persons is always interesting, especially when there is so much importance in what is happening and being said. My favorite scenes, however, are the exchanges between Quintus and Peter; Quintus and Maryam, the mother of Jesus; and the sessions with Caiaphas and Pontius Pilate.

“I am glad this book is done, and pleased at what I was able to do,” he said. “It was hard work! Winston Churchill, who wrote many books in his lifetime, is reputed to have said something like the following: Writing a book is an all-consuming task, like a dragon on your back; and just when the dragon is about to consume you totally, you slay the beast and throw it to the public.”

As for this book definitively proving the Resurrection, he thinks that “the investigation as outlined in this book considers all the possibilities for the disappearance of the body of Jesus from the tomb. It is a simple deductive logical sequence. Was Jesus alive or dead when placed in the tomb? If alive, he could not have walked out, as the stone blocking entry to the tomb and the Roman soldiers sent to guard it would have been insurmountable obstacles. The evidence is that he was dead. In that case, either his body was stolen, or he rose from the dead. There is no evidence whatsoever that the body was stolen; and the probability of the fearful followers of Jesus stealing the body is remote. In the absence of theft, the only possible explanation is that Jesus rose from the dead. That is the logic. The facts are that many persons attested to seeing him after his death; that the demeanor of the Apostles changed totally at Pentecost, and that no one effectively disputed the Resurrection story factually. Hence, I believe this book lays out the definitive statement.”

The logical conclusion about the resurrection leads the reader, just as it led Quintus the skeptical investigator, and Saul, the antagonistic tentmaker, to reach certain conclusions based on probabilities that something is true—in this case, that Jesus was God. That is what Dr. Martino tried to demonstrate.

There are many who believe that Jesus was merely a prophet, one among others. Prophets are merely human beings.

Dr. Martino hopes that readers will not only share their opinions, thoughts and reactions with him, but will also use the book to spark discussions.

As a narrator seeking to portray the characters audibly, I can say unhesitatingly that I was often gripped with such an emotional reaction to a scene that I had to stop, gather myself, and re-read it. For a narrator, it is one thing to try to capture the tone and emotion of a character; it is something else again to try to prevent the character from affecting the emotions of the narrator. This has been a powerful experience for me and will be for many other readers.