Words on the Joy of Faith

Words on the Joy of Faith 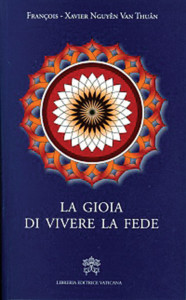 The Vatican Publishing House has issued a collection of conversations held by Servant of God Vietnamese Cardinal François-Xavier Van Thuân, who worked in the Vatican as vice-president and then-president of the Pontifical Council for Justice and Peace from 1994 to 2002. The book, for the moment only in Italian, features words and dialogues from a great witness to faith at the end of a life which had dark moments, such as a period of solitary confinement which lasted for 13 years.

The faithful will soon have the joy of seeing him raised to the altars; the closing ceremony of the diocesan phase of the beatification and canonization cause was in fact held in the vicarage of Rome on July 5, 2013.

Servant of God Cardinal François-Xavier Van Thuân is one of the most beautiful figures of the Roman Curia and of the 20th century Catholic Church. The joy of the faithful in his canonization is a fully justified joy.

Cardinal Van Thuân’s life was exemplary. He was a true martyr of faith. 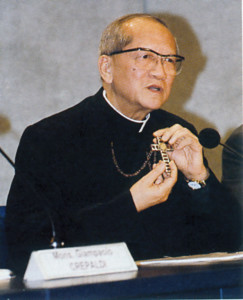 The cardinal during a press conference: “They allowed me to cut a piece of wood in the form of a cross. I hid it in a piece of soap. I cut a very, very tiny piece of electric wire… In this cross that I wear, there is the wood and the electric wire from my prison.”

He was appointed vicar general of the diocese of Huê and ordained archbishop of Na Thrang in 1967; he had been coadjutor archbishop for just a few days when Saigon was seized by the Communist troops of North Vietnam. On August 15, 1975, the Feast of the Assumption, he was imprisoned. A nephew of Vietnamese President Ngo Dinh Diem, Van Thuân was the last of a family of witnesses to faith. From 1689 to 1885, his paternal ancestors were victims of persecution; his great-grandfather was forcibly entrusted to a non-Christian family so that he might lose his faith. In 1885 all the inhabitants of his mother’s village were burned alive in the local parish church. His grandfather was saved, being a student in Malaysia.

As a child, François was imbued with Christian doctrine and stories of his family’s martyrs. At last it was up to him to take up the baton and bear the cross of suffering and persecution. In the thirteen years of imprisonment he never surrendered or gave way to dejection, though being in complete abandon and often left without food or drink.

From his prison cell he began to send messages to the Christian community on scraps of papers which a 7-year-old child smuggled to him.

His reflections were collected into a book, The Road of Hope.

From Saigon, Van Thuân was first moved in chains to Vihn Quang. There he was held in confinement for nine years, closely watched by two guards.

Unable to keep a Bible, he gathered all the pieces of paper he could find into a booklet on which he wrote more than 300 quotations from the Gospels which he remembered by heart.

At 3 p.m. every day, the time of Jesus’ death on the Cross, he celebrated Mass on the palm of one hand using one drop of water and three drops of wine which he managed to have as “a remedy for his stomach ache.” 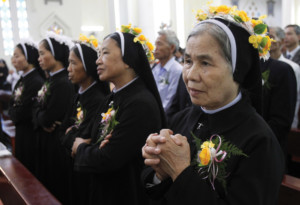 Nuns attend a Mass for the profession of vows for the Lovers of the Holy Cross of Hung Hoa Sisters in Son Tay, Vietnam, October 29, 2011. Vietnam has the second-largest Catholic community in Southeast Asia, after the Philippines (CNS photo)

He was released on November 21, 1988, and on November 15, 1994, John Paul II appointed him vice-president of the Pontifical Council for Justice and Peace, of which he became president onJune 24, 1998.

In the Vatican, he soon became a reference point as the representative of a Church which had experienced suffering and martyrdom, yet which had never faltered in its love for Christ or the joyful announcement of salvation.

In 2000, the year of the Great Jubilee, he was selected for the preaching of spiritual exercises to John Paul II and the Roman Curia and was among the prelates who celebrated with the Pope the March 21 Mass with the solemn imploration for forgiveness of the sins committed by the children of the Church.

He was raised to the cardinalate along with Jorge Mario Bergoglio in the February 21, 2001 Consistory, and the following year on September 16, 2002, he returned to the Father’s house after a long illness.

These short biographical notes on Cardinal Van Thuân are intended to highlight his figure and help make this extraordinary man, who has left us speeches and writings of great profundity, better known. Hence the enormous value of the publication by the Vatican Publishing House of The Joy of Living One’s Faith, a volume featuring a series of conversations held by Cardinal Van Thuân and systematically collected by some young people who were lucky enough to participate in them.

These are, as Archbishop Mario Toso, secretary of the Pontifical Council for Peace and Justice, says in the preface, “speeches delivered on several occasions to educate in the faith those of his fellow countrymen he met in various parts of the world. A pastor’s sapiential reflections,” Toso continues, “but also a general synthesis of his teachings and experience of faith, a spiritual testament for his brothers and children: a testament of joy.”

This is a book to be enjoyed and read with interest because it outlines a plan for the life of every Christian: to live their faith and spiritual vocation with the joy originating from the awareness of redemption through Jesus’ sacrifice.

It is a message of great power in contrast with the bleak prospects of the present age, “tending,” says Toso, “to marginalize God from man’s life.”

God is often regarded as hostile to freedom and moral autonomy. The book, with its lively narration of a direct witness, is an invitation to live the joy springing from our being children of God and companions of man, which obliges everyone to make the most of their talents and put them to the service of their brothers.

In his book, Cardinal Van Thuân is lavish with teachings and practical advice, providing moral support for the daily spiritual life of the faithful. He analyzes the 10 great causes of a leader’s failure and examines them with perspicacity.

A poor leader “is proud, treats people like machines, proceeds arbitrarily, does not listen to anybody, defends his opinions with obstinacy. He is undecided, pessimistic and creates confusion. He is unable to employ people, he does not know how to train or select his employees, he does not integrate with others, he is intolerant and narrow-minded. He distrusts everyone and suffers from ‘chronic indecision.’ He handles everything on his own and is unable to distinguish the essential from the contingent. He says the right things, but is unable to move from words to deeds; he prides himself on his achievements, crediting himself with other people’s merits and is ungrateful to those who have helped him. He is incapable of a full commitment. He does not have any definite plan or program. He is an egoist and a self-seeker. He does not pray, he relies on himself alone, on the tricks and intrigues of the world. He only trusts power.”

With as much frankness, the cardinal inverts these negativities, outlining the 10 great victories which turn not only a man, but also a leader into an honest person and a good Christian.

He lists the 10 great achievements which can change and renew our society and the 10 great diseases affecting the Church and the world: sticking to the past, pessimism, self-glorification, individualism, laziness, worldliness and divisions.