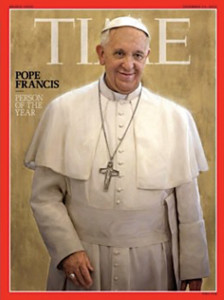 POPE FRANCIS has been named Time magazine’s “PERSON OF THE YEAR” for 2013. He is the third Roman Pontiff to receive this honor after John XXIII in 1962 and John Paul II in 1994.

“The decision didn’t come as a surprise given the great resonance and attention surrounding the election of Pope Francis right from the start of the new pontificate. The fact that one of the most prestigious awards to be attributed by the international press should go to someone who promotes spiritual, religious and moral values as well as calls for peace and greater justice in an incisive manner is a positive sign. As for the Pope himself, he’s not someone who seeks fame and success, because he has put his life at the service of announcing the Gospel of the love of God for mankind. It is pleasing to the Pope that this service should appeal and give hope to women and men. And if this choice of ‘Person of the Year’ should mean that many people have understood this message — at least implicitly — the Pope is really happy about this.” 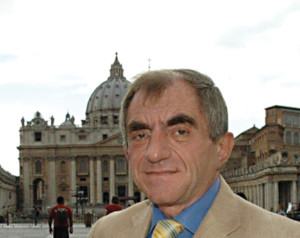 The winning footage was selected by the jury “as a work showing unknown aspects of Joseph Ratzinger through previously unseen images and testimonies of common people outside the hierarchy of the Catholic Church, sometimes people who had faced hardships in their lives. Brunelli’s film highlights Benedict XVI’s human qualities, providing a true and exciting biography of a Pope who guided the Church through one of the most difficult and turbulent periods of her history, showing love, courage and tenderness which many times have not been recognized or properly understood.”

The second prize was equally divided between the documentary film Scrittori per un anno. Fede e letteratura (Writers for One Year: Faith and Literature) by DANIELA MAZZOLI from RAI Educational and Archivio segreto Vaticano (The Vatican Secret Archives), by JOAQUIM FRANCO aired by the Portuguese television station SIC TV.

The award ceremony, held at the Pontifical University of the Holy Cross, began with the showing of a video on Giuseppe De Carli by Pier Luigi Lodi from RAI Vaticano; this was followed by a commemorative speech delivered by director of RAI Vaticano Massimo Enrico Milone, the address of Msgr. Luis Romera, rector of the University of the Holy Cross, and of Father Federico Lombardi, director of the Vatican Press Office.

The cultural association Giuseppe De Carli was founded in 2010 in memory of Giuseppe De Carli, who died that same year. According to its statute, it aims at promoting reflection and debate on religious information.

Giuseppe De Carli, born in1952, began to cover Vatican events in 1987; he covered John Paul II’s pontificate for 18 years, taking part in many of his trips. 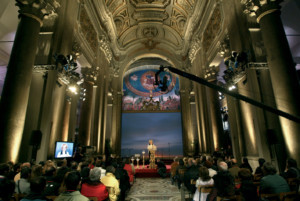 A moment of biblical reading, La Bibbia giorno e notte (The Bible day and night) held in the Roman Church Santa Croce in Gerusalemme in 2008.

At the end of the award ceremony the second edition of the Giuseppe De Carli Prize was launched; this will feature, alongside well-known journalists, budding journalists who have not yet turned 30 by December 31, 2013.

The regulations of the competition, which will be held every year and is supported by the academic contribution of the Pontifical University of the Holy Cross and the Pontifical Theological Faculty of St. Bonaventure (Seraphicum) is available on the association’s website www.associazionedecarli.it. 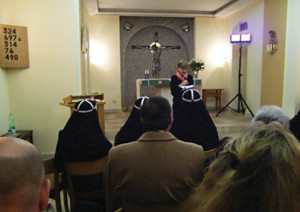 Headquarters of the Bridgettine Order.

THE ORDER OF ST. BRIDGET

“Is St. Bridget, patron of Europe and the only Swedish saint officially canonized by the Catholic Church, an important saint for our time?” This is the beginning of an article which appeared in L’Osservatore Romano (28 November 2013) under the title “Brigida per gli emarginati di oggi – il saluto dell’Ambasciatore Gudmundson” (Bridget for today’s marginalized – the farewell of Ambassador Gudmundson) on a conference on November 26, 2013, at Casa di Santa Brigida (headquarters of the Bridgettine Order) in the heart of medieval Rome. Present with the outgoing Swedish Ambassador to the Holy See, Ulla Gudmundson, were Prof. Carina Nynäs of the Åbo Akademi University’s department of humanities in Turku (Åbo in Swedish), and Gudmundson’s predecessor, Fredrik Vahlquist, with his wife.

“Certainly,” was Carina Nynäs’ resolute answer to the above question. In her talk, she drew a parallel between St. Bridget, who lived in the 14th century from 1303 to 1373, and Annika Ȍstberg, a Swedish national who served a controversial 20-year jail term in the US for her involvement in murders.

“While in prison, Annika Ȍstberg went through a spiritual journey quite similar to that of Bridget in her Revelations,” L’Osservatore Romano quoted her as saying. “The message of both of them is that evil inside us must be tackled head-on, defeated and overcome, for us to reach reconciliation and ultimately God.”

The conference marked also the conclusion of Ambassador Gudmundson’s 5-year term in Rome. “For me it was natural to bid farewell at Casa di Santa Brigida, which was my home in Rome,” she said. “I think that both St. Bridget and Annika are the kind of allies Pope Francis would like to have in his efforts to reach out to this world’s marginalized.”

As a matter of fact, reaching out to the marginalized was and is one of the great charisms of the Bridgettine Order, as also evidenced in a previous event, again in Casa di Santa Brigida, when on November 14, 2013, two medals of the Los Angeles based “Simon Wiesenthal Institute” were officially handed over to the present Abbess General of the Order, Mother Tekla Famiglietti, in memory of two late Bridgettines, Blessed Mother M. Elisabeth Hesselblad and Servant of God Mother M. Ricarda Beauchamp Hambrough, for what they did for the Jews, in particular the Piperno and Sed families, in Rome during World War II.

Cardinal Kurt Koch, president of the Pontifical Council for Promoting Christian Unity, and Dr. Piero Piperno, in representation of the Jewish families, were in attendance.

The ceremony to hand over the two medals marked the closing of an ideal circle which began in 2005 with the inscription of the name of Mother Hesselblad in the register of the “Righteous Among the Nations” and continued this summer in Los Angeles, with a big gala event in the presence of more than 1,200 people and Piero Piperno’s son and a grandson, respectively Lamberto and Ariel Piperno, as guests of honor.

“Beyond social and religious affiliations, this honorable recognition reflects awareness for the centrality of the person, the high and inescapable value of every human being and his life as a right and duty to defend, promote and develop,” Abbess Famiglietti said.

Blessed Mother M. Elizabeth Hesselblad, a Swede who converted from Lutheranism to the Catholic Church, in 1911 brought back to new life the Order of the Most Holy Savior of St. Bridget, now present in three continents. In April 2000 she was beatified.

During German occupation in Italy, she was living with Mother M. Ricarda in Rome at Casa di Santa Brigida in Piazza Farnese, as Abbess of the Order she had founded.

Mother Riccarda, her assistant, was born in London and in 1914 she joined the newly re-established Bridgettine Order.

The Roman Jewish families of Piperno and Sed, after wandering from one place to another as a result of the Nazi occupation on September 8, 1943, decided to return to Rome and found refuge in the Convent of S. Bridget, where Mother Elizabeth and Mother Riccarda showed them the hiding places in case of a Nazi raid into the convent. —Alberto Carosa 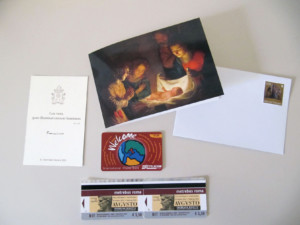 Mobile telephone recharges, tickets for Roman buses and subways, and an envelope with a stamp from the Vatican already pasted on to mail a Christmas card: these are the Christmas gifts POPE FRANCIS decided to give, through BISHOP KONRAD KRAJEWSKI, Vatican Almoner, to 2,000 poor people, who met Pope Francis or were assisted by Vatican charity.

The bags with Christmas gifts were distributed by the nuns of Mother Teresa, through the Vatican soup kitchen which they run.

The initiative had the support of the transit agency in Rome (ATAC), which decided to contribute 4,000 subway and bus tickets. The Vatican Post Office, meanwhile, donated stamps and the Vatican Press the envelopes.