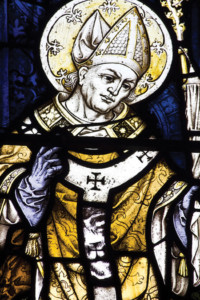 “There are four planes or fields in which God is reflected. Two within, reason and revelation, or the light of nature in the intelligence, and the illumination of the Holy Spirit elevating the intelligence by a supernatural light. Two also without, creation and the Church, or in other words, the world of nature, which is the first creation whereon the traces and outlines of God’s being, presence, and image are inscribed in characters of goodness, wisdom, and power; and the second creation, or the mystical Body of the Incarnate Word, in which the image of the invisible God is revealed in the face of Jesus Christ.”

Edmund Rich was born in Abingdon on November 20, the feast of St. Edmund, the King of East Anglia, about the year 1175. He was the son of a local merchant named Edward or Reynold Rich. Of his three brothers, Robert supposedly wrote one of his biographies. His two sisters, Margaret and Alice, became prioresses of Catesby in Northamptonshire.

Edmund’s boyhood seems to have been spent in Abingdon and Oxford, and he was probably first educated at the abbey in the former town. His mother Mabel enticed him by little allurements to practice asceticism like herself, to wear sackcloth, to fast on Friday, and to refuse food on Sunday and other feastdays until he had sung the whole Psalter. The family was apparently in easy circumstances, as the father’s surname suggests. However, Mabel’s severe discipline did not make the home a comfortable one for her husband. So the father withdrew to the greater comfort of the monastery of Eynsham, near Oxford. Legend has it that — as a child — Edmund encountered the Christ Child at Milham Ford near Magdalen Bridge, and that he also placed a ring on a statue of Our Lady in the Church of St. Mary the Virgin and a ring on his own finger which he never removed, as a pledge of his commitment to her.

Edmund and Robert were sent to be educated in Paris, then closely connected with Oxford. The next few years of Edmund’s life were spent in Paris and Oxford in study and teaching. Edmund practiced austere self-discipline, wore garments of ropecloth and horsehair, and showed himself careless about teacher’s fees both in Paris and Oxford. He was devoted to his pupils, nursing them in sickness and selling the treasures of his library to help needy scholars.

He became one of Oxford’s first lecturers with a master of arts, and Oxford’s first doctor of divinity. Edmund taught, at first, the secular disciplines at Oxford, particularly philosophy and mathematics, and was one of the pioneers in the revival of the study of Greek. Roger Bacon, the great scientist, speaks of him as “Edmund, the first in my time who read the Elements — of Aristotle — at Oxford.” In 1222, Edmund left Oxford to become treasurer of Salisbury Cathedral and prebend of Calne. During the eleven years he held this post, he must have taken a share in the work of building the most graceful of all English cathedrals.

At this time, he was engaged in preaching the Crusade all over England, with marked success. In 1227, Pope Gregory IX sent him an order to preach the Sixth Crusade, which he did, foregoing the stipend which was his right in return for his preaching. He seems in general to have been a powerful and effective preacher and once said: “I would rather say five words devoutly with my heart than five thousand which my soul does not relish with affection and intelligence. Sing to the Lord with understanding: what a man repeats with his mouth, that let him feel in his soul.” In this way, he warned against multiplying the externals of prayer at the cost of true and authentic interior prayer. In 1233, he received, at Calne, the news that he had been appointed archbishop of Canterbury by the Pope, to whom a disputed election had been referred.

Prince Edward, afterwards the great King Edward I, was confirmed by Edmund, and perhaps, in later life, derived from him something of his crusading zeal and his popular sympathies. As archbishop, Edmund excommunicated the infamous Simon de Montfort for his clandestine marriage with Eleanor, the king’s sister. Notwithstanding the gentleness of his disposition, he firmly defended the rights of Church and State against the exactions and usurpations of Henry III. He visited Rome in 1237 to plead his case in person.

He finally broke down under the stress of all these struggles and, feeling his position to be intolerable, he followed his great predecessors, Thomas à Becket and Stephen Langton, in retiring from his troubled life to exile at Pontigny, and lived in seclusion as a simple monk. As a boy, he had seen visions in the fields of Abingdon and Oxford. The end of his life at Pontigny and Soisy was also vision-haunted. Death came to him at Soisy on November 16, 1240, and his body was carried back to Pontigny, where his shrine may be seen today, behind the high altar of the abbey there.

Reported miracles and, still more, the memory of his pure and holy life, attracted many worshippers to the shrine and, at length, led to his canonization in 1247. This was hotly opposed, but finally allowed owing to the warm support of King Louis IX. St. Edmund Hall at Oxford College is named after him.

He is the joint principal patron of the diocese of Portsmouth, England, and has lent his name to the Edmundite Order.