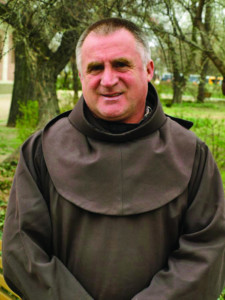 “Every child is a message for humanity: God loves us. Raising a child is an encounter with God. Jesus said: if someone adopts one of the smallest, receive myself,” says Father Csaba Böjte, who, for more than 25 years, has been adopting and raising children off the streets of Hungary after the collapse of Communism. Born in 1959, in Southern Transylvania, Father Csaba grew up under the Communist regime in Hungary; his own father was imprisoned for seven years for political reasons. Reflecting back on the situation of his country, Father Csaba describes the needs of the people after the collapse of Communism:

“In Southern Transylvania, Communism built with great financial effort an industry that wasn’t profitable from the beginning. They mined coal in the Jiu Valley, they mined metal ore in the Apuseni Mountains, and they separated out the valuable metals from the ore in Hunedoara and Calan. For these enterprises a cheap, unskilled, young labor force was brought from all over the country. Thousands of people were dislocated, receiving small, simple apartments, with most of them forming beautiful families with a lot of children.

The inevitable downfall of the dictator brought with it the downfall of these megalomaniac plans as well. Suddenly this mass of people without any roots found itself unemployed. Many families fell apart beneath these difficulties and problems. The saddest thing is that many children found themselves on the street. In the meantime the Franciscan community, after fifty years of forced silence, started to bloom again. We felt that it was the will of God to…take upon ourselves the problems and troubles of the people. In 1992 I was moved from Dej to Deva. In the spring of 1993 we established the Saint Francis Foundation.”

For more than 25 years, Father Csaba’s Francis Foundation has been looking after children; during this time over 6,000 children have passed through the Foundation. Today there are over 2,000 children in their care in over eighty-three locations. These children receive more than just food and shelter; they receive a community.

Rabu, a boy from Romania, speaks about his experience with the Foundation and Father Csaba:

Radu, you have lived here for quite a while…. What is the best thing about this foundation, how would you express it?– That you are together with people who are in a similar situation as you are. For this reason they understand you. You are in a community. You are not alone. You receive love — not from everyone, because not everyone is alike — but you receive love from a lot of people and that is what is most important. You have role models, who you must follow, who you would like to follow, such as Father Csaba and certain educators. This presents a very big opportunity, a very good opportunity for impoverished people.

As a young man, Fr. Csaba worked in the mountains as a miner, then later, desirous of becoming a priest, he was secretly admitted to the Order of Saint Francis at Csíksomlyó in 1982, since religious orders were firmly prohibited at that time in Communist Romania. For Fr. Csaba, his goal was never a question: “What else could my goal be than to free my fellows from the chains of fear and little faith, to help them become saints to the benefit of their brothers and sisters?”