Pope at Mass: Lent is an opportunity to be simple and true

Pope at Mass: Lent is an opportunity to be simple and true 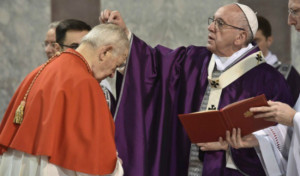 Pope Francis celebrated Mass at the Casa Santa Marta on Friday highlighting the need for believers to be true Christians and shun appearances.

Taking his cue from the Book of the prophet Isaiah, Pope Francis condemned all forms of hypocrisy and explained the difference there is between objective and formal reality.

Formal reality, the Pope said, is an expression of objective reality, but the two must proceed together, or else we end up living an existence of “appearances”, a life “without truth”.

The simplicity of appearances, he continued, should be rediscovered especially in this Lenten period, as we practice fasting, almsgiving and prayer.

Christians, the Pope said, should show joy while doing penance. They should be generous with those in need without “blasting their trumpets”; they should address the Father in an intimate manner, without seeking the admiration of others.

During Jesus’s time, he explained, this was evident in the behavior of the Pharisee and the publican; today Catholics feel they are “just” because they belong to such an “association” or because they go to Mass every Sunday, they feel they are better than others.

“Those who seek appearances never recognize themselves as sinners, and if you say to them: ‘you too are a sinner! We are all sinners’ they become righteous”, the Pope said, and try to show themselves “as a perfect little picture, all appearances”. When there is this difference between reality and appearances, he added, “the Lord uses the adjective: Hypocrite”.

The hypocrisy of everyday life

Each individual is tempted by hypocrisy, Pope Francis said, and the period that leads us to Easter can be an opportunity to recognize our inconsistencies, to identify the layers of make-up we may have applied to “hide reality”.

“Young people”, he said, “are not impressed by those who put on appearances and then do not behave accordingly, especially when this hypocrisy is worn by whom he described as “religion professionals”. The Lord, he said, asks for coherence.

“Many Christians, even Catholics, who call themselves practicing Catholics, exploit people!” he said.

So often, the Pope continued, they humiliate and exploit their workers sending them home at the beginning of summer and taking them back at the end so they are not entitled to a pension.

“Many of them call themselves Catholics, they go to Mass on Sundays… but this is what they do”. This kind of behavior, he said, is a mortal sin!

The Pope concluded his homily inviting the faithful to rediscover the beauty of simplicity, of reality that “must be one with appearance” during this time of Lent.

“Ask the Lord for strength and go forward with humility, doing what you can. But don’t put make-up on your soul, because the Lord won’t recognize you. Let us ask the Lord for the grace to be consistent, not to be vain, not to want to appear more worthy than we are. Let us ask for this grace, during this Lent: the coherence between formality and the reality, between who we are and how we want to appear”.