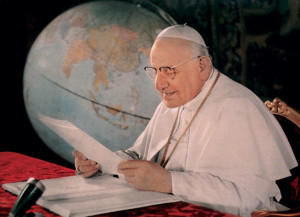 The Pacem in Terris conference was organized by the Pontifical Council for Justice and Peace in Rome Oct. 2-4.

Pacem in Terris, published in 1963, was Blessed John XXIII’s last encyclical. Addressed to all people of good will and not just to Catholics, the letter addressed people’s hopes and fears at the height of the Cold War and in the wake of the Cuban missile crisis. Blessed John called for international and interreligious cooperation in the promotion of world peace, emphasizing the importance of human rights and dignity. 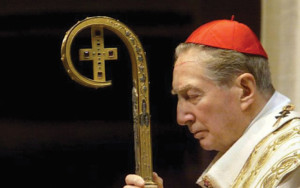 This summer, on the eve of the first anniversary of the death of CARDINAL CARLO MARIA MARTINI, Pope Francis called the late fellow Jesuit and biblical scholar a “prophetic” figure and a “man of discernment and peace.”

The late cardinal, who died August 31, 2012 at the age of 85, was “a father for the whole Church,” and remembering one’s fathers “is an act of justice,” the Pope said during an August 30 meeting with a group of Italian Jesuits.

Representatives of the Italian Jesuit province met with the Pope to present the creation of the Carlo Maria Martini Foundation — a nonprofit initiative aimed at promoting the late cardinal’s writings and the study of his life and works. The foundation will work in conjunction with the archdiocese of Milan, where Cardinal Martini served as archbishop from 1979 to 2002.

During the brief meeting, the Pope told the group that the late cardinal played an important role during the General Congregation of the Society of Jesus in 1974 in discussions about the relationship between faith and justice.

The Pope expressed his gratitude and esteem for the late cardinal and recalled how even Jesuits “at the ends of the earth” in Argentina would use his texts during their spiritual retreats.

The cardinal was a prolific author whose books were best-sellers in Italy and included everything from scholarly biblical exegesis to poetry and prayer guides.

Pope Francis consecrated Fernan­do Vérgez Alzaga a bishop on November 15 in a solemn ceremony in St. Peter’s Basilica. Bishop Vérgez had been appointed secretary general of the Governorate of Vatican City State on August 30 (the important position held by Archbishop Carlo Maria Viganò before he was named nuncio to the United States).

The homily delivered by Pope Francis was the one proposed by the ritual for ordination of bishops, with a few personal remarks added by the Holy Father. “In the name of the Church I thank you,” the Pope said, for “a humble and quiet service, a filial and fraternal service.”

Born in Salamanca, Fernando Vérgez was ordained a priest in 1969. He served later in the Congregation for the Institutes of Consecrated Life and Societies of Apostolic Life. In 1984, he served on the Pontifical Council for the Laity before heading the Telecommunications Office for Vatican City State. 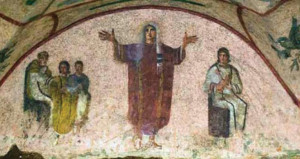 A fresco adorns the Catacombs of Priscilla, a cemetery complex that stretches for miles underground in Rome.

On November 19 the Vatican unveiled newly-restored frescoes in the CATACOMBS OF PRIS­CILLA, which house the earliest known image of the Ma­donna and Child and frescoes showing women in prayer.

Cardinal Gianfranco Ravasi, the Vatican’s culture minister, presided over the opening of the “Cubiculum of Lazarus,” a tiny burial chamber featuring a 4th century fresco of Christ raising Lazarus, still wrapped in his shroud, from the dead. This work had been obscured by centuries of grime.

The labyrinthine cemetery complex stretches for miles underneath northern Rome. It is known as the “Queen of the Catacombs” because it features burial chambers of several Popes and a tiny, delicate fresco of the Madonna nursing Jesus dating from around 230-240 A.D. — the earliest known image of the Madonna and Child. More controversially, the catacomb features two scenes said by proponents of women’s ordination to show women priests: one in the Greek Chapel showing a group of women celebrating a banquet, another in a burial chamber showing a woman dressed in what seems to be a dalmatic — a cassock-like robe — with her hands up in a position used by priests for public worship.

The Association of Roman Catholic Women Priests — which includes women who have been excommunicated for participating in purported ordination ceremonies — says the images are evidence that there were women priests in the early Church.

But Fabrizio Bisconti, the superintendent of the Vatican’s sacred archaeology commission, says such a reading of the frescoes is “a fable, a legend.” Bisconti says the scene of the banquet isn’t a Eucharistic banquet but a funeral banquet (appropriate for a cemetery). He says that even though women were present they weren’t celebrating Mass. Bisconti says the fresco of the woman with her hands up in prayer is just that — a woman praying. “These other readings of the past are a bit sensationalistic and not trustworthy,” he said.

The Priscilla Catacombs are now being featured in a novel blending of antiquity and modern technology: for the first time, Google Maps has gone into the Roman catacombs, providing a virtual tour of the Priscilla complex available to anyone who can’t visit the real thing.

The Catacombs of Priscilla are an eight-mile network of tombs on several levels dug out of soft volcanic tufa from the 2nd through the 5th centuries. Restorers used laser technology to clean the wall paintings. The Priscilla Catacombs are thought to have been named after the wife of Manius Acilius Glabrio, Roman consul in 91 A.D. (the future Emperor Trajan was his co-consul), executed by Domitian for atheism, i.e., his refusal to worship the Roman gods because he was a Christian. She had him buried in what was once a quarry and donated the property to the Church so others could be buried there: Popes St. Marcellinus (296-304), St. Marcellus I (308-309), St. Sylvester I (314-335), Liberius (352-366), St. Siricius (384-399), St. Celestine I (422-432) and Vigilius (537-555), and many martyrs. 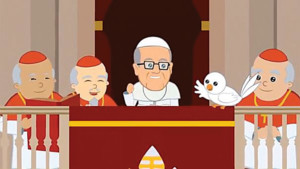 Pope Francis as an animation.

A light-hearted four-minute-long video narrates the life of POPE FRANCIS by using CARTOONS and animation. The project, which aims at showing the life of the Pope in a dynamic way, was produced by a group of university students who run a Catholic website (http://en.catholic-link.com). It’s being translated into 15 languages.    The cartoon also features some interesting aspects in the Pope’s life, such as his passion for chemistry and his support for the Argentinian soccer team San Lorenzo de Almagro. —Rome Reports 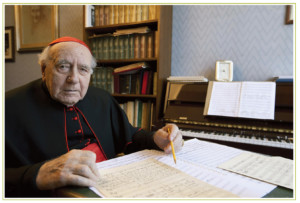 Italian Cardinal DOMENICO BARTOLUCCI, who had devoted most of his priestly life to music and served as director of the Sistine Chapel Choir for more than 40 years, died on November 11 at the age of 96. In a telegram of condolence to Cardinal Bartolucci’s family and friends, Pope Francis described him as a “dear and esteemed priest, illustrious composer and musician, who exercised his long ministry particularly through sacred music, which is born of faith and expresses faith.”

The Pope said Cardinal Bartolucci valued and promoted polyphony, “aimed at elevating the heart in praise of God.”

On November 13, the funeral of Cardinal Domenico Bartolucci was celebrated by Cardinal Angelo Sodano, dean of the College of Cardinals. After the Mass, Pope Francis joined the ceremony to give the final commendation.

Cardinal Bartolucci had retired from the Sistine Chapel post in 1997, but he continued composing music, including Benedictus, a piece written and performed in 2011 for retired Pope Benedict XVI, who had named him to the College of Cardinals a year earlier.

Already a student of music and an assistant choir director, he was ordained to the priesthood in 1939 and the same year earned a diploma in composition and orchestra direction from the Florence Conservatory of Music. In 1942, he came to Rome to refine his knowledge of sacred music and was soon helping direct the choir at the Basilica of St. John Lateran.

After a brief term as a parish priest near Florence, he was called back to Rome to serve as choir director at the Basilica of St. Mary Major and to teach composition at the Pontifical Institute for Sacred Music. In 1952, he became the assistant director of the Sistine Chapel Choir.

Appointed director of the choir by Pope Pius XII in 1956, he reorganized its musical program, formed the Sistine Chapel Boys’ Choir, took the group on the road to give concerts around the world, and continued composing works for both choir and orchestra.

His death leaves the College of Cardinals with 200 members, 109 of whom are under the age of 80 and therefore eligible to vote in a conclave.